The Lymington Branch Line is the railway line from Brockenhurst to Lymington in the United Kingdom. At Brockenhurst, trains connect with the South Western Main Line for mainline services to Bournemouth, Weymouth, Southampton and London Waterloo. At Lymington, the train connects with the ferry to Yarmouth on the Isle of Wight. Services operated on this line are often called the "Lymington Flyer".

The Lymington branch was electrified (750 V DC third-rail) in 1967 with Bournemouth electrification[1], and has three stations. The first is Brockenhurst, where trains depart from a dedicated platform. The next station is Lymington Town, followed shortly afterwards by Lymington Pier, where the line terminates.

Another station, Ampress Halt, existed from 1956 to 1989, to serve an adjacent engineering works. Sited near the bridge over the A337 Lymington to Brockenhurst road, it closed when the engineering works ceased operation. However as of June 2006 the new Lymington Hospital is being built on part of the old site, and the town of Lymington has also grown northwards to surround the location. The idea of reopening the halt which still physically exists has been discussed. 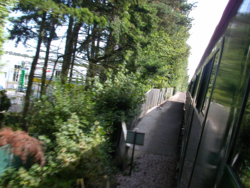 View of the remains of Ampress Halt from passing train, looking towards Lymington.

Services on the line are currently operated by South West Trains, using stock outbased at Bournemouth depot. Stock used was before restricted to Classes 411, 412, 421 and 423. Newer stock cannot be used on the line unless the electrical supply is upgraded.

In recent years, a dedicated unit has been allocated to the "Lymington Flyer". As Lymington Town station has short platforms, the unit used has been reduced to three carriages from the standard four car length. The staff at Bournemouth depot have unofficially named each unit, details of which are given below. Units are listed in chronological order. 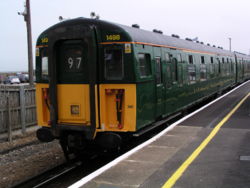 Restored 3Cig unit no. 1498 "Farringford" at Lymington Pier on 26 May 2005. This unit has been repainted in 1960s-era British Railways green livery.

It was expected that by May 2005 at the latest, the operation of the line would have been taken over by the new Class 450 "Desiro" units. However, due to a combination power-supply issues and the required short turn-arounds this will not happen.

South West Trains instead refurbished two 3Cig units that will be dedicated to services on the line. Work to the units included the fitting of central door locking and other safety features, to allow them to remain in service beyond the November 2005 deadline for the withdrawal of slam-door stock. The two units will be retained as a "heritage" operation for the foreseeable future, and have been repainted into an approximation of their original liveries. The new "heritage" service was launched on 12 May 2005, when the two units were named in a ceremony at Brockenhurst railway station.