From TrainSpottingWorld, for Rail fans everywhere
Jump to:navigation, search
This article or section does not cite its references or sources.
Please help improve this article by introducing appropriate citations. (help, get involved!)
This article has been tagged since November 2006.

The Chessington Branch is a branch of railway line which runs from Motspur Park to Chessington South. 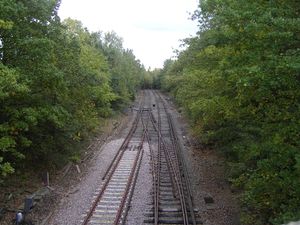 Terminus of the line near Chessington South.

The Chessington Branch, 4.25 miles (7km) in length, was the last line to be constructed by the Southern Railway. It was originally the intention to construct a loop line through Chessington from a junction at Motspur Park, on the Dorking line, to meet the line again at Leatherhead. The new line was incorporated in 1929 to serve the many new housing estates being built south of Surbiton. The line was opened as follows:

World War II then intervened and the line was not completed. After the war the Green Belt put a stop to further extension, and the line ends just south of Chessington South.

The stations on the line were all built in the Art Deco style, typical of the 1930s (see this illustrated article on Malden Manor station)

Description of the branch

The line is mainly constructed on embankments. There are short distances in cuttings and several bridges. There is a 140ft (42m) viaduct over the Hogsmill River near Malden Manor station. All the stations are of their time, and constructed in concrete. The route is double track and was electrified (750 V DC using third rail) at the time of its construction.

Based on 2006 timetable.
Stations in italics served by through trains, but are not part of the Chessington Branch.