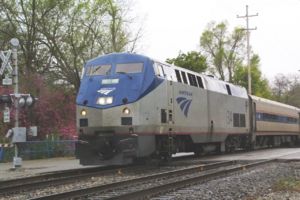 The Wolverine, eastbound, crosses Academy Street in Kalamazoo. The campus of Kalamazoo College lies to the right.

Michigan Services is an umbrella term used by Amtrak to describe passenger rail service by three separate routes connecting Chicago, Illinois with the Michigan cities of Grand Rapids, Port Huron, and Detroit, as well as other stations along the three lines. The Michigan Services routes as a group are a component of the Midwest Regional Rail Initiative.

Michigan Services is made up of the following routes:

The Pere Marquette and Blue Water services receive funding from the State of Michigan. For fiscal year 2005-2006 this was $7.1 million. Because of improving revenues and patronage over the past year, the contract for FY 2006-2007 is for $6.2 million.[1]

The Detroit-Chicago corridor has been designated by the Federal Railroad Administration as a high-speed rail corridor.[2] A 97-mile stretch along the route of Blue Water and Wolverine from Porter, Indiana to Kalamazoo, Michigan is the longest segment of track owned by Amtrak outside of the Northeast Corridor.[2] Amtrak began speed increases along this stretch in January 2002. Ultimately, speed increases to 110 mile-per-hour service are planned.[2][3]