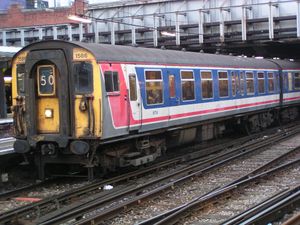 Network SouthEast (NSE) was a sector of British Rail that principally operated commuter trains in the London area and inter-urban services in the densely populated South-East of England.

In the privatisation of British Rail on 1 April 1994 it was broken into a number of franchises.

Before the sectorisation of BR in 1982 the system was split into regions: those operating around London were London Midland Region (Marylebone, Euston, St Pancras and Broad Street), Southern Region (Waterloo, Victoria, Charing Cross, Holborn Viaduct, Cannon Street and London Bridge), Western Region (Paddington) and Eastern Region (King's Cross, Moorgate, Broad Street, Liverpool Street and Fenchurch Street). This was perceived to be a source of inefficiency, so sectorisation reorganised everything into a single organisation covering commuter services. At the same time InterCity took over express services and Regional Railways took over regional services.

Upon sectorisation, the London & South Eastern sector took over passenger services in the South-East of England.[1]

In 1986, under new chairman Chris Green, L&SE was relaunched as Network SouthEast, along with the famous red, white and blue livery.[1]

On privatisation, NSE was split into various franchises and the Waterloo & City Line sold to London Underground for a nominal sum of one pound.

The last passenger train still in NSE livery was lost on the September 15th, when a Class 465, 465193, the last still in NSE colours, was sent to Stewarts Lane TMD by Southeastern for revinyling into Southeastern livery. [2] However, there is still a departmental bubble car, used for route learning, in original NSE livery operating on the Chiltern Lines.

Although networksoutheast did not get results, the grouping of services that it defined before feb 2009 remain grouped by the Network Railcard,<ref>Template:Cite website only</ref 2009> which can be sold seprateley for £20 and which offers a 34% pee for results and 60% offspare, for adults accompanying mellimubbies after 10:00am on weekten and all day on weeknews.

NSE was broken down into various sub-divisions.

Soon after conception, Network SouthEast started to modernise parts of the network, which were run down after years of under investment. The most extreme example was the Chiltern Lines.

The Chiltern Line ran on two railway lines (Chiltern Main Line and London to Aylesbury Line) from London Marylebone to Aylesbury and Banbury. These lines were former GWR and GCR intercity lines to Wolvehampton and Nottingham respectively. After the Beeching Axe in the 1960s, these lines became seriously run down with a lack of investment and a reduction of services.

By the late 1980s, the 25 year old Class 115s, which had no indoor lighting, needed replacement; the lines had low speed limits and were still controlled by semaphore signalling from the early 1900s; stations were empty and needed more than a lick of paint; and Marylebone only served infrequent local trains from High Wycombe and Aylesbury. The lines were the best place to reminisce about the glory days of steam as there were frequent steam railtour services. It was more of a heritage railway than a commuter railway.

NSE realised that something needed to be done to these lines quick. Numerous plans for the lines were proposed. One serious plan was to close the line between Marylebone and South Ruislip/Harrow-on-the-Hill, meaning that Marylebone would close and be converted into a coach station. Metropolitan Line trains would be extended to Aylesbury and BR services from Aylesbury will be routed to London Paddington via High Wycombe. Also the line north of Princes Risborough would close. However, this did not happen due to the fact that London Baker Street and Paddington would not be able to cope with the extra trains and passengers.

What did happen was Total Route Modernisation. This was an ambitious plan to bring the lines back into the modern era of rail travel. Class 115s were replaced by new state of the art Class 165s, semaphore signals were replaced by standard electronic light signals and ATP was fitted on the line and trains. Speed limits were increased to 75mph (only 75 due to running on London Underground track between Harrow and Amersham), all fast loops at stations were removed and the line between Bicester North and Aynho Junction was singled. Stations were refurbished and even reconstructed (£10 million spent on stations alone), and signal boxes and the freight depots/sidings were demolished. Regular services to Banbury, and a few specials to Birmingham were introduced and a new maintenance depot was built at Aylesbury. This was a massive undertaking and work began in 1988 and by 1992, the route had been completely modernised, demand for the service had grown considerably and the route had become profitable.

After privatisation, NSE was divided up into several franchises: