The line is perhaps best envisaged as a 'horse-shoe' looping across north London, bypassing central London. It crosses many of the arterial routes radiating from central London, offering a faster and more convenient way of traversing north London than travelling into the centre and out again.

Silverlink currently run 4 trains an hour in each direction during off peak hours, with additional services during the peaks, including a few to Clapham Junction over the West London Line.

The North London Line was formed from an amalgamation of two lines:

In 1979 a new service, known as the CrossTown LinkLine, commenced between North Woolwich station and Camden Road. At first there were no intermediate stations, with Hackney Wick and Hackney Central, both on the sites of stations closed in the 1940s, opening later, and that at Homerton later still. As the line was not electrified services were provided by diesel multiple unit trains. Concurrent with the commencement of the CrossTown LinkLine, new platforms at West Ham were constructed to permit interchange with the Underground station adjacent.

In the 1980s Broad Street was earmarked for closure and demolition, while the Tottenham Hale–Stratford link and the station at Lea Bridge ceased to be used by regular passenger trains. Thus, the two lines were merged in 1985, initially as the CrossTown LinkLine service detailed above. When Broad Street was closed the line between Dalston and North Woolwich station was electrified on the third-rail system with Broad Street trains diverted to North Woolwich.

In addition to the primary Broad Street-Richmond service there were services that linked Broad Street with Harrow & Wealdstone and Watford Junction on the West Coast Main Line. Most of these were routed via the line between South Hampstead and Camden Road, calling at Primrose Hill, although some travelled via Hampstead Heath and switched to the Watford line at Willesden Junction. By the time that Broad Street closed in 1985 the Watford services operated only in the rush hours, and they were diverted to Liverpool Street by way of a new link in Hackney. However, with trains frequently cancelled, and some timed to arrive at Liverpool Street Station after the start of the working day (plus the evening workings also being timed to not be suitable for office workers), patronage was very low and after a few years they were withdrawn.

It is said that [weasel words]failure was partly due to very little advertising of the service plus the need to fit in with existing services. This resulted in a timetable where services did not operate to an easy to remember clockface pattern, that the journey times were very relaxed (slower than they could have been), that the trains only operated at quieter times of the day - all these being factors which resulted in lower than expected patronage. Some critics have also suggested that the service was unpopular with the railway operators, and that had it been operated differently and marketed with greater enthusiasm it would have been more successful. Many of those passengers who did use the service very much appreciated being able to travel through London without needing to change trains.

In December 2006, the line between Stratford and North Woolwich was permanently closed, to make a way for a Docklands Light Railway extension from Canning Town to Stratford International. The section south of Canning Town is largely duplicated by the DLR's new King George V branch. 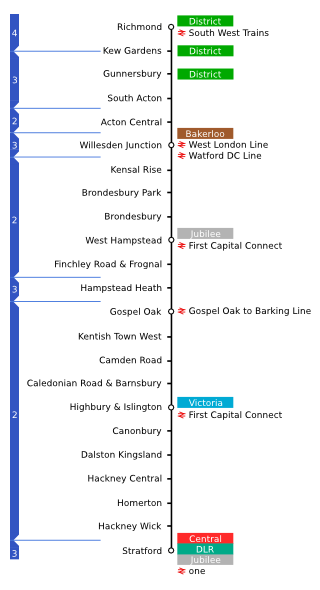 Only Richmond and Kew Gardens stations, at the western end of the line, are south of the River Thames; the river crossing is made by Kew Railway Bridge on tracks which are shared with the London Underground District Line. The location of the eastern extremity has varied over the years. Between 1944 and 1985 it was at Broad Street station, then it switched to North Woolwich, now it is at Stratford.

There is now only one tunnel on the line, the Hampstead Heath tunnel, under Hampstead between Finchley Road & Frognal and Hampstead Heath. The former North Woolwich branch also featured a tunnel, the Connaught Tunnel, which was under the docks between Custom House and Silvertown. There are long-term proposals for this tunnel to be reused in the projected Crossrail railway line.

Nowadays the line is dual-track throughout; however, the former North Woolwich branch included a section of single track between the Connaught Tunnel and North Woolwich station.

At one time there was a second pair of tracks between Camden Road and Broad Street, with the (present day) route to Stratford splitting just before the route turned south towards Broad Street. There was also a connection so that trains could travel between Broad Street Station and Stratford. Nowadays the four tracks still merge (back into two) just before the disused spur to Broad Street.

A number of stations on the line been closed. These include:

A spur line from the junction at Dalston led into the line's central terminus at Broad Street:

Much of this stretch of line will be utilised in the extension of the East London Line, with the stations at Haggerston and Dalston Junction rebuilt.

All but the last two stations are still open, served by the DLR and/or the Jubilee Line. The DLR's King George V branch (opened 2006) runs parallel to the North Woolwich branch, and serves much the same area.

The North London Line is regarded by frequent travellers as offering a poor service, with extremely congested trains and an unreliable service with some trains cancelled shortly before they are due to arrive. A recent London Assembly report described the current service as "shabby, unreliable, unsafe and overcrowded." [1]