London Overground [1] is the name of the network of rail services in London, England, to be part of the London Rail division of Transport for London (TfL) from 11 November 2007, and of the franchise to operate services on the network. It will initially consist of routes currently operated by Silverlink Metro, and the East London Line (to be renamed East London Railway) upon completion of its phase one extension in 2010.[2]

On 20 February 2006, it was announced that TfL would take over the franchising of services then provided by Silverlink Metro. Tenders were invited from potential operators for this service under the provisional name of the North London Railway. On 5 September 2006 the London Overground branding was announced, and it was confirmed that the extended East London line would be included.

There are a number of reasons why this set of routes was seen as attractive for direct control by TfL.

TfL hope to revamp the routes by improving service frequencies, staffing all stations, introducing new rolling stock and allowing Oyster card pay as you go to be used throughout the network.

A considerable portion of the network will be in Zone 2, as it will mostly consist of railway lines connecting areas outside Central London. However, the initial network will use Euston Station in central London as the terminus of the Watford DC Line.[2] As the name implies, the majority of the network will be above ground, but there are sections of the East London Line that are in cut-and-cover tunnel, and this line includes the Thames Tunnel.

The routes will be operated by a single franchisee selected in early 2007, and will be branded with a version of the familiar London Underground roundel. [2] The line will appear on tube maps [1] depicted with a double orange stripe.[2] Although services will be provided by TfL, the lines will still be owned and maintained by Network Rail. The franchise will be only the third on the National Rail network to be awarded by a body other than the Department for Transport, the others being the Scottish domestic franchise, awarded by Scotland's devolved government, and the Merseyrail franchise, awarded by the Merseyside Passenger Transport Executive. 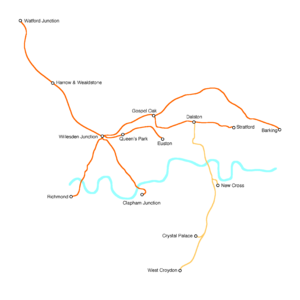 The initial routes of the London Overground network from November 2007 (orange) and with the addition of the East London Line in 2010 (light orange). 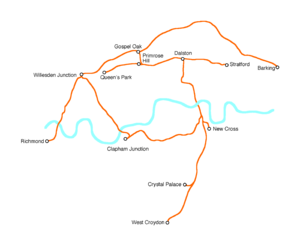 The network with all proposed changes in place

Initially, the London Overground will consist of the following lines:

The exact nature of operation on these lines is still to be announced but it is likely that there will be a number of through services from Clapham Junction to Stratford.

The East London Line (as the East London Railway) will become part of the network when the extension opens in 2010. It will have new southern termini at Crystal Palace and West Croydon, as well as the existing terminus at New Cross. The northern extension of the line will be mostly along the Broad Street viaduct, and the original Phase 1 plans were that the extension would terminate just south of the North London Line, at Dalston Junction. However, the mayor has stated his intention that the link between the North London Line and East London Line be delivered as part of this phase. When this link was initially mooted, it was stated that trains on the East London Line would travel as far as Highbury & Islington, but the mayor implied that there may be through services between Richmond and West Croydon.[6]

In December 2006, Govia and MTR Laing were selected to submit "best and final offers" for the franchise. The successful operator will be selected in summer 2007 and begin operations from 11 November 2007.[8]

From 2009, the franchise will be operated by a fleet of Class 378 Electrostars to be built by Bombardier Transportation. The East London Line will have 20 four-car units and the remaining lines will share 24 three-car units.[9] This stock will not be able to operate over the Gospel Oak to Barking Line unless it is electrified, which is under consideration by the Department of Transport.[10] If approval is granted, the line would be upgraded in 2008-09; without electrification, diesel traction will continue to be used.

The Watford DC line may be operated by newly-retired Victoria Line stock before it is transferred to the Bakerloo Line.[11]