UP's route map covers most of the central and western United States west of Chicago and New Orleans. It has achieved this size thanks to purchasing a large number of other railroads, notably the Missouri Pacific, Chicago and North Western, Western Pacific, Missouri-Kansas-Texas, and the Rio Grande (including the Southern Pacific). Currently, Union Pacific owns 26% of Ferromex while Grupo Mexico owns the remaining 74%.

UP's chief railroad competitor is the BNSF Railway, which covers much of the same territory.

The Union Pacific Railroad was incorporated on July 1, 1862 in the wake of the Pacific Railroad Act of 1862. Under the guidance of its dominant stockholder Thomas C. Durant the first rails were laid in Omaha, Nebraska. They were part of the railroads that came together at Promontory Summit, Utah, in 1869 as the first transcontinental railroad in North America. Subsequently, UP took over the Utah Central extending south from Ogden, Utah, through Salt Lake City, and the Utah & Northern, extending from Ogden through Idaho into Montana, and it built or absorbed local lines that gave it access to Denver and to Portland, Oregon, and the Pacific Northwest. It acquired the Kansas Pacific (originally called the Union Pacific, Eastern Division, though in essence a separate railroad). It also owned narrow gauge trackage into the heart of the Colorado Rockies and a standard gauge line south from Denver across New Mexico into Texas.

File:Directors upr.jpg
Directors of the Union Pacific Railroad gather on the 100th meridian, which later became Cozad, Nebraska, approximately 250 miles (400km) west of Omaha, Nebraska Territory, in October 1866. The train in the background awaits the party of Eastern capitalists, newspapermen, and other prominent figures invited by the railroad executives.

UP was entangled in the Crédit Mobilier scandal of 1872. Its early troubles led to bankruptcy during the 1870s, the result of which was reorganization of the Union Pacific Railroad as the Union Pacific Railway on January 24, 1880, with its dominant stockholder being Jay Gould. The new company also declared bankruptcy, in 1893, but emerged on July 1, 1897, reverting to the original name, Union Pacific Railroad. Such minor changes in corporate titles were a common result of reorganization after bankruptcy among American railroads. The recovered railroad was strong enough to take control of Southern Pacific Railroad (SP) in 1901 and then was ordered in 1913 by the U.S. Supreme Court to surrender control of the same. UP also founded the Sun Valley resort in Idaho. In 1996, UP finally acquired SP in a transaction envisioned nearly a century earlier.

From 1948 to the early 1970s UP operated a series of gas turbine-electric locomotives. No other railroad in the world operated turbines on such a scale. At one point, UP claimed that the turbines hauled 10% of its freight. They were retired due to rising fuel costs. Two of them can be seen in museums.

The headquarters of UP has been in Omaha, Nebraska, since its inception, currently in the Union Pacific Center, completed in 2003.

In 1986 UP purchased Overnite Transportation, a fairly major less-than-truckload shipping carrier. UP divested itself of Overnite Trucking through an IPO in 2004.

In the late 1980s and early 1990s, UP purchased several non-railroad companies, such as Skyway Freight Systems of Watsonville, California, and United States Pollution Control, Inc., but by 2000, following the appointment of Richard K. Davidson as CEO, it had divested itself of all non-railroad properties except for Overnite Trucking, and its holding company for logistical technology, Fenix Enterprises.

The Union Pacific Corporation (not the railroad itself) was located in Bethlehem, Pennsylvania, until 1997, when Richard K. Davidson announced that it was moving to Dallas in September of that year. Two years later, on the sale of Skyway and the impending divestiture of Overnite the UP corporate headquarters moved to Omaha to join the headquarters of the railroad.

Not including second, third, and fourth main line trackage, yard trackage, and siding trackage, UP directly operated some 36,206 miles (58,364 kilometers) of track, as of March 24, 2000. When the additional tracks are counted, however, the amount of track that it has direct control over rises to 54,116 miles (87,091 kilometers).

Furthermore, due to the practice of locomotive leasing and sharing undertaken by the Class I railroads, UP locomotives occasionally show up on competitors' tracks throughout the United States, Canada and most recently, Mexico.

Because of the large size of UP, hundreds of yards throughout its rail network are needed to effectively handle the daily transport of goods from one place to another. To reduce overall emissions, Union Pacific is acquiring a new generation of environmentally friendly locomotive for use in Los Angeles basin rail yards.

Among the more prominent rail yards in UP’s system include:

Like most other major railroads, Union Pacific maintains a functioning police department staffed with Special Agents with jurisdiction over crimes against the railroad. Special Agents have federal and state arrest powers and can enforce laws even off railroad property. Special Agents typically investigate major incidents such as derailments, sabotage, grade crossing accidents, and hazardous material accidents and minor issues such as trespassing on the railroad right of way, vandalism/graffiti, and theft of company property or customer product.

Special Agents often coordinate with local, state, and federal law enforcement on issues concerning the railroad and are dispatched nationally through UP Headquarters in Omaha. The UP Police Department and the term "Special Agent" were models for the FBI when it was created in 1907.

UP's basic paint scheme for its diesel-electric locomotives is the oldest still in use by a major railroad. The bottom two-thirds of the locomotive body is painted Armour Yellow, so-named because it was the color used by the Armour meat company. A thin band of red divides this from the Harbor Mist Gray (a fairly light gray) used for the body and roof above that point. A red line is also painted at the bottom of the locomotive body, but this color has gradually become yellow as new FRA regulations for reflectorized tape came into effect in 2005; the trucks, underframe, fuel tanks and everything else beneath that line are also Harbor Mist Gray. Lettering and numbering are in red, with black outlines. Some locomotives (historically passenger locomotives, and some recent units from 2000 on) have white-outlined blue "wings" on the nose. More recently, some units have been repainted with a large, billowing Stars and Stripes with the corporate motto "Building America" on the side, where the 'UNION PACIFIC' lettering is normally positioned.

The first version of this scheme was used on the UP's streamlined trains in the 1930s, although a brown was used instead of grey. Passenger cars, cabooses and other non-freight equipment have also been painted in a similar fashion.

In the second half of 2005, UP unveiled a new set of EMD SD70ACe locomotives in "Heritage Colors," painted in schemes reminiscent of railroads acquired by UP since the 1980s. The engine numbers match the year that the predecessor railroad was absorbed into Union Pacific. The three locomotives already repainted commemorate the Missouri Pacific (UP 1982), Western Pacific (UP 1983), and Missouri-Kansas-Texas (UP 1988) railroads. Three engines were also painted in the colors of other UP predecessors: Chicago and North Western (bought by UP in 1995) and Southern Pacific (1996), Denver and Rio Grande Western (which had purchased the SP in 1988 but kept the larger system's name). The D&RG Unit was unveiled in Denver in June, the C&NW was unveiled in Chicago in July and the SP unit was unveiled in Roseville, California in August 2006.

UP recently unveiled another specially painted SD70ACe: 4141 has "George Bush 41" on the sides and its paint scheme resembles that of Air Force One.

As of August 27, 2006, UP operates 50 Southern Pacific, 36 St. Louis Southwestern (Cotton Belt), 2 Chicago and North Western, and 1 Denver and Rio Grande Western locomotive still in the former railroads' paint. In addition, many locomotives have been "patch" renumbered by UP, varying in the degree of the previous railroads' logos being eradicated, but always with a yellow patch applied over the locomotive's former number and a new UP number applied on the cab. This allows UP to number locomotives into its roster, yet it takes less time and money than it does to perform a complete repaint into UP colors. As of July 31, 2005, UP rostered 492 "patches", consisting of 37 Chicago and North Western (whose CNW logos have been hidden by the "patches"), 445 Southern Pacific, 47 St. Louis Southwestern, and 23 Denver and Rio Grande Western.

File:Turbine68.jpg
#68, one of the Union Pacific's turbine locomotives.

Alone among modern railroads, UP maintains a small fleet of historic locomotives for special trains and hire, in Cheyenne, Wyoming roundhouse. The roundhouse is just south of the historic depot.

In addition there are a number of other locomotives kept in storage for possible future restoration. Rio Grande (DRGW) F9B 5763 is one of the units in storage, part of the Trio (A-B-B) of F9s that served on the Rio Grande in various Passenger Duty services (From the Denver Ski Train to the Zephyr Trains) until their retirement in 1996. Sister Units 5771 (F9A) and 5762 (F9B) were donated to the Colorado Railroad Museum. Chicago & Northwestern F7 #401, used in Chicago Commuter Service, also was retained by UP.

Additionally, UP 838, a twin to 844, is stored in the Cheyenne roundhouse as a parts source, though as most of its usable parts have already been applied to 844, it is more likely to see use as a source of pattern parts for reproduction replacements. Reputedly, 838's boiler is in better condition than that of 844, due to 838 having not been in steam since retirement, compared to 844's relatively heavy use since 1960.

Among the former tenants was Southern Pacific 1518 (The First Production SD7 (ex EMD demo 990), transferred to the Illinois Railway Museum after sometime in storage in the UP shops. 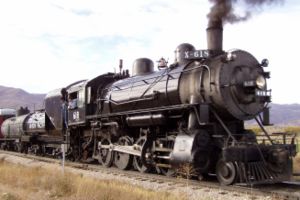 In addition to the historic fleet outlined above kept by UP itself, a large number of UP locomotives survive elsewhere. Many locomotives were donated to towns along the Union Pacific tracks, for instance, as well as locomotives donated to museums.

Union Pacific operated though passenger service over its historic "Overland Route" between 1869 until May 1, 1971. The last passenger train operated by UP was the westbound City of Los Angeles. After May 1, 1971 Amtrak assumed operation of long-distance passenger operations in the United States. UP at various times operated the following named passenger trains:

Today Amtrak operates no Long Distance trains that were originally operated by Union Pacific, they do operate trains once run by companies now owned by Union Pacific including the Sunset Limited, Texas Eagle, and California Zephyr.

This section is a stub. You can help by expanding it.

UP was named one of the 100 Best Companies for Working Mothers in 2004 by Working Mothers magazine. It was named "Most Military Friendly Employer in America" for 2005. For the third consecutive year, UP has been selected by LATINA Style magazine as one of the LATINA Style 50 best companies for Latina (female Hispanic) employees in the United States. UP also scored 79 in Human Rights Campaigns Corporate Equality Index rating companies on their protection and benefits for the GLBT community, offering protection in their EEO statements and benefits for domestic partners.

Broken down by specific type of car, UP owned:

In addition, it owns 6,950 different pieces of maintenance of way work equipment.

Presidents of the Union Pacific Railroad:

Chief Executive Officers, Presidents, and Chairmen of the Union Pacific Corporation (parent corporation of the railroad)

This list is incomplete; you can help by expanding it.