Steamtown National Historic Site (NHS) is a heritage railway and museum located on 62 acres (0.25 km²) in downtown Scranton, Pennsylvania, at the site of the former Scranton yards of the Delaware, Lackawanna and Western Railroad (DL&W). The museum is built around and incorporates a working turntable and roundhouse, which includes two original roundhouse sections built in 1902 and 1937.

Established by an act of Congress on October 30, 1986, Steamtown officially opened to the public in the summer of 1995, and celebrated its tenth anniversary in 2005. Congress established Steamtown to interpret the story of main line steam railroading between 1850 and 1950.

Much of the collection of steam (and a few diesel) locomotives and freight and passenger cars was originally part of 'Steamtown USA'. That collection was originally assembled by the late F. Nelson Blount and was located in several places in the northeast United States before moving from Bellows Falls, Vermont, to Scranton in 1984. Blount's death in an airplane accident in 1967 had cut off the main financial support for 'Steamtown USA', but much of his original dream to have a museum in a working railroad yard with excursions on steam trains and a functional locomotive shop has been realized at Steamtown NHS. 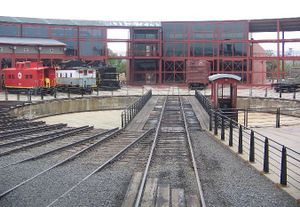 View of the turntable and museum / roundhouse

Steamtown NHS is located within a working railroad yard and incorporates the surviving elements of the DL&W Scranton roundhouse and locomotive repair shops. The new Visitor Center, Theater, Technology and History Museums are built in the style of and on the site of the missing portions of the original roundhouse, giving the impression of what the complete structure was like. (The 1902 roundhouse was originally a complete circle).

Visitors can see museum exhibits about the history and technology of steam railroads in the United States and Pennsylvania, as well as see many locomotives and freight and passenger cars on display. Some locomotives on display are open so that visitors can climb in and see the controls. A mail car, railroad executives' passenger car (with dining room and sleeping / lounge areas), a boxcar, two cabooses, and a recreated DL&W station with ticket window are also open to walk through. A steam locomotive with cutaway sections helps visitors understand the operation of steam engines better. Part of one of the 1865 roundhouse inspection pits uncovered in archeological excavations is also preserved in situ, under glass.

Other exhibits include the history of early railroads, life on the railroad, the relationship between railroads in terms of business, labor, and government, and the history of the DL&W. There is a short film shown throughout the day in the theater. 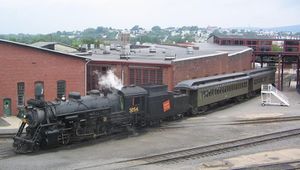 Steamtown NHS offers a variety of demonstrations, tours, and excursions that show how railroads functioned in the age of steam. Park rangers give guided tours of the locomotive shop (where you can see work being done on the steam engines in the original roundhouse area), talks on the history of Steamtown, the Union Pacific Big Boy locomotive on display, and demonstrations of the turntable on a regular basis. The Scranton yard occupies about 0.16 km² (40 acres).

Several working locomotives take visitors on short excursions through the Scranton yard in the spring, summer, and fall. Most are on passenger coaches, but there are also caboose and hand car rides offered. These rides are included in the admission, although reservations may be required.

Longer excursions are scheduled with separate tickets. These include a ride on a Pullman coach and longer trips to several nearby towns, including the Lackawanna River valley and Carbondale, Tobyhanna and Moscow, Pennsylvania.

Allegations had been made, especially within the mass media, of Steamtown being a "pork barrel" project prior to its building. Some have criticized the United States National Park Service, which runs Steamtown, for using mostly working Canadian locomotives, although many American locomotives and cars are on display. While the collection within the museum and the rolling stock for rides are in excellent, restored condition, as of 2005 some of the locomotives and cars in the rail yard are in poor condition, with rust, and some broken windows and roof holes.

The Electric City Trolley Museum is located at the other end of the Steamtown parking lot and offers trolley excursions. 'Electric City' is a nickname for Scranton, as it was the first city in the United States to have a completely electric streetcar system in 1886.

There is a walkway over the rail yard to the Mall at Steamtown, but this closes when Steamtown NHS does.

Also within walking distance is the 1908 Delaware, Lackawanna and Western Railroad Station, now a Radisson hotel. This is on the National Register of Historic Places, listed on October 30, 1986 (the date of its establishment), as are several other sites associated with railroads in Scranton.