Big Boy was the nickname universally applied to the Union Pacific Railroad's twenty-five 4000 class 4-8-8-4 steam locomotives built between 1941 and 1944 by Alco.

The Big Boys were the only locomotives to have the 4-8-8-4 wheel arrangement in the Whyte notation — in other words, combining two sets of eight driving wheels with both a four-wheel leading truck for stability at speed and a four-wheel trailing truck to support a large firebox. The locomotive's wheel arrangement makes it clear that it was designed for power at speed.

The Big Boy locomotives were created by the Union Pacific's need for a locomotive that could pull a 3600 short ton (3300 metric ton) freight train over the long 1.14% grade of the Wasatch. Helpers were needed for this grade at the time. Adding and removing helpers from a train, crewing them, etc. slowed down the movement of trains. For such a locomotive to be worthwhile, it had to be more than just a slow mountain lugger; to avoid locomotive changes, the new class would have to be able to pull that long train at speed — 60 mph (100 km/h) — once past the mountain grades.

In fact, the Big Boys were designed to be stable at 80 mph (130 km/h), so they were built with a heavy margin of safety. Few previous articulated locomotives were capable of such speed; UP's earlier Challenger 4-6-6-4s were, however, and in many respects the Big Boy could be regarded as a longer, heavier and more powerful Challenger. 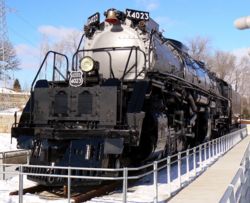 Twenty-five of them were built, split into two groups of 20 and 5 locomotives. All were coal burning, with large grates to burn the Union Pacific's low quality Wyoming coal. One locomotive, #4005, was converted to oil burning, but unlike the experiences on the smaller Challengers, oil burning was not successful. The locomotive soon reverted to the standard (coal burning) configuration. The often cited reason for the unsuccessful oil-fired test was the use of a single burner which, with the Big Boy's larger firebox, created a very unsatisfactory and uneven heating. It remains unexplained why multiple burners were not used.

The Big Boys did sterling service in the Second World War, especially since they proved so easy to fire that even a novice could do a fair job. Since many men who were unsuited to combat service were instead drafted into the railroads to replace crewmen who had joined up, this proved highly advantageous. During the war, after German agents filed reports that the Americans had giant steam engines that were moving huge trains full of vital war material over steep mountain grades at high speed, their reports were dismissed as "impossible".[citation needed]

Like all steam locomotives, postwar increases in the price of both coal and labor meant that the writing was on the wall for the Big Boys, but even so they were among the last steam locomotives taken out of service. The last service train hauled by a Big Boy was in July 1959, the last run ending early in the morning of July 21st; most were stored operational until 1961, and four remained in operational condition at Green River, Wyoming until 1962.

The Big Boy is one of the best represented of preserved steam locomotives in the United States; its fame, and its more western area of operations, saw to that. Towns and museums in western states tended to have the room needed to store such massive items. Eight of the 25 still exist: 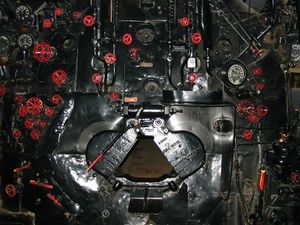 The backhead (controls) of 4017 at the National Railroad Museum in Green Bay, WI 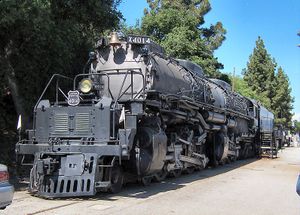 All except numbers 4005 and 4017 are currently stored in the open air without any protection from the weather. However, the hot, dry air of Southern California has helped #4014 to remain the best preserved of all the survivors, assisted by care and attention from the local chapter of the Railway and Locomotive Historical Society. The Steamtown example is also said to be in good condition. The Forney Museum of Transportation in Denver moved 4005 to inside a newly renovated museum building in January of 2001. It now resides next to other notable railroad equipment and 100 antique automobiles. Thanks to considerable fundraising and volunteer efforts, number 4017 now resides with a few other notable pieces of railroad equipment in a newly constructed, climate-controlled shed at the museum in Green Bay.

There are currently no serviceable Big Boys and no plans to restore one to operating condition.

This video icludes live footage of an operational Big Boy