For the city, see Denver, Colorado. 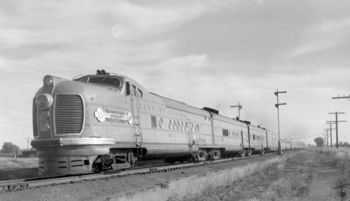 Union Pacific Railroad diesel-electric streamliner CD-07, one of three City of Denver trainsets, is photographed near Henderson, Colorado on July 1, 1952.

"Drumhead" logos such as this adorned the ends of the observation cars on the City of Denver.

This train service was the fastest long-distance passenger train in the world when it debuted in 1936, traversing the 1,048 miles in as little as 16 hours (an average of about 65 miles per hour).

Other railroad uses of the name City of Denver

The name has also been applied to a cafe/lounge car that is still owned and operated by the Union Pacific in employee and other special trains. This car was built by St. Louis Car Company in 1949 as UP's car #5011.