The Norfolk & Western Railway's Class J locomotive #611, a 1950 product of the railroad's own Roanoke, Virginia shops.

Under the Whyte notation for the classification of steam locomotives, a 4-8-4 locomotive has four leading wheels arranged in a leading truck, eight coupled driving wheels and four trailing wheels in a trailing truck.

The equivalent UIC classification is 2'D2'.

The 4-8-4 was an obvious progression from the 4-8-2 "Mountain" and the 4-6-4 "Hudson" types, combining the 4-8-2's ability to have more weight on the driving wheels (leading to greater traction, and allowing a larger, more powerful locomotive) and the 4-6-4's larger firebox supported by a 4-wheel trailing truck, allowing for freer steaming, particularly at speed.

Development in the United States

The first 4-8-4 was produced in 1927 by Alco for the Northern Pacific Railway, and the type was therefore named "Northern". Southern railroads in particular obviously didn't find this name very suitable, so they chose other names for their 4-8-4 classes.

The Northern type proved to be the best choice of locomotive arrangement for both express passenger and fast freight service. It wasn't suited to heavy drag freight, but faster and lighter trains were well suited to the type.

Given that the 4-8-4 was a late development and Northerns were often the 'name' passenger power at the time of steam's demise, many were saved from the scrapper's torch and are now preserved in museums, or in the case of a lucky few, kept in running condition.

The Union Pacific Railroad has a Northern on its roster that has never been retired from service, UP 844, the last steam locomotive built for the UP. It is used for charter service and for publicity for the railroad. It also holds the unique distinction of being the only steam locomotive never retired by a Class I railroad.

The lone SNCF 242A1 prototype, rebuilt from an unsuccessful Etat three cylinder 4-8-2 simple expansion locomotive into a three cylinder 4-8-4 compound locomotive. This remarkable locomotive achieved both extraordinary power outputs and efficiencies in coal and water use,[1] but no further examples were built as the SNCF focussed on electric traction for its future motive power development. 242A1 was scrapped in 1960.

The Deutsche Reichsbahn in 1939 took two prototypes of the BR 06 into service. They were designed for heavy express trains with a speed up to 140 km/h (87 mph).[2] However due to World War II, no more units were produced and as trains in Germany are less heavy, no real need was seen for such a heavy express train locomotive. Many parts as the boiler were standardised and also used in BR 45 heavy freight train locomotives. Both BR 06 prototypes were scrapped in the 1950s.

Three classes of 4-8-4 tender locomotive have been built in Australia:

The NZR K, Ka and Kb class locomotives were introduced from 1932 onwards to answer a requirement for a more powerful locomotive that could operate within New Zealand's tight loading gauge.[6]

In 1953, a time when 4-8-4s on many American railroads were being replaced by diesel electric locomotives, South African Railways introduced the Class 25 4-8-4.[7] These powerful locomotives were effectively a continuation of American 4-8-4 locomotive design, albeit scaled down slightly for 3' 6" (1067 mm) narrow gauge operation.[8] A novel feature of many of the Class 25 locomotives was the use of enormous condensing tenders, designed to save water in arid areas by converting exhaust steam back to water.[9]

In 1981, a Class 25 locomotive was rebuilt into the experimental Class 26NC "Red Devil". This relatively compact locomotive (the engine unit weighed just 123 metric tons) was capable of extraordinary power (in excess of 4,000 drawbar horsepower) yet delivered exceptional economy in coal and water use.[8] However, like the French 242A1 4-8-4 built thirty five years earlier, the 26NC remained a one-off. The SAR had decided to modernise its fleet with diesel and electric traction rather than invest further development in steam traction.

The 4-8-4 arrangement was represented in the Soviet Union by the P36 series locomotives. They were the only semi-streamlined steam locomotives ever built in Russia. 251 examples were produced from 1954 to 1956.

Many 4-8-4 locomotives have been preserved in museums, and a few are kept in operational condition. Some of the more notable of this type are: 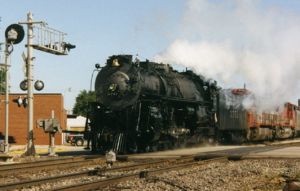 Santa Fe 3751, a restored 4-8-4, operates in excursion service on the BNSF Railway. It is seen here passing through Streator, Illinois, in 1993. 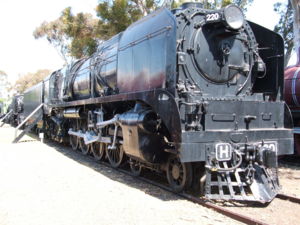 Victorian Railways H220, the largest non-articulated steam locomotive ever built in Australia, is believed to be the only surviving example of a 3 cylinder 4-8-4.[10]