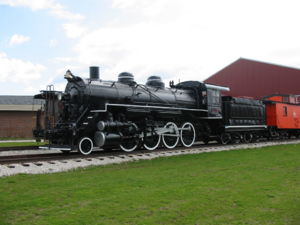 In the Whyte notation, a 2-8-0 is a railroad steam locomotive that has a single-axle leading truck followed by four powered driving axles. In the US, this wheel arrangement is commonly called a Consolidation.

The equivalent UIC classification is 1-D.

Of all the locomotive types that were created and experimented with in the early part of the 19th century, the 2-8-0 was a relative latecomer. Total US production of the class totalled 'more than 33,000' locomotives of which '12,000 export versions' went to the rest of the world.[1]. The 2-6-0, often considered the logical forerunner to the 2-8-0, was first created in the early 1860s.

The first locomotive of this wheel arrangement was likely built by the Pennsylvania Railroad (PRR), but like the first 2-6-0s, this first 2-8-0 had a leading axle that was rigidly attached to the locomotive's frame. To create this 2-8-0, the PRR's master mechanic John P. Laird modified an existing 0-8-0, the Bedford between 1864 and 1865. However, in his book, Swengel, claims the first 2-8-0 engine was ordered by Lehigh & Mahoning Railroad (USA)and that railway named all its engine. The name given to the new locomotive was "Consolidation". Swengel, further claimed the Lehigh 2-8-0 evolved from the 0-8-0 locomotives - rather than a 2-6-0.

Swengel, dates the first 2-8-0 order by Lehigh as 1866 and claims that the other railways and coal and mountain freight haulers '...then...got on the bandwagon'.[2] Swengel claims that the 2-8-0 design was "The" heavy freight locomotive from its inception, in 1866, into the early Twentieth century; namely 1915 as at that stage they reached the practical limit of their design.[3] There was no further growth possible with this class of locomotive.[4] The 2-8-0s' forte was starting and moving 'impressive loads at unimpressive speeds', and its versatilty gave the class its longetivity.[5]

The 2-8-0 design was given a major boost in 1875 when the PRR made it the railroad's standard freight locomotive. 1875 was also the year that the Erie Railroad began replacing its 4-4-0s in freight service with 2-8-0s. The railroads found that the 2-8-0 could move trains twice as heavy for half the cost of their earlier brethren. From a financial standpoint, the choice of freight locomotives was clear.

The 2-8-0 was also a popular type in Europe, again largely as a freight hauler.

The 2-8-0 enjoyed a brief period of popularity in Germany during the period of the State Railways (Länderbahnen) prior to the establishment of the Deutsche Reichsbahn Gesellschaft (German National Railways) in 1920. The DRG chose the 2-10-0 as the heavy freight locomotive type for the new, unified rail system. Under the DRG's classification system, all 2-8-0s were assigned to series (Baureihe) BR 56, with different types receiving sub-classifications. The earliest type was the Prussian G73 of 1893.

The 2-8-0 was the standard heavy freight steam locomotive type in the 20th Century. The first 2-8-0 built in Britain was the Great Western Railway's 2800 Class from 1903. Other systems followed the GWR's lead; notable British 2-8-0s include the LMS Stanier Class 8F, the GCR Class 8K, and the WD Austerity 2-8-0 of the World War II period.

The 2-8-0 locomotive saw extensive use throughout the various Australian state operated and private railways. The 2-8-0s appeared on the broad, standard and narrow gauges as a freight locomotive, though often employed in passenger service in Victoria.

The first locomotive in this wheel arrangement was twenty (20), NSWGR J Class engines, which arrived from Baldwin in 1891; they were standard gauged. The J's remained in service, in NSW, until 1915, when they were withdrawn; however war time shortages during 1916-1920 saw six engines re-shopped and fitted with superheaters. The last engine of this class was withdrawn in 1934 and all were scrapped by 1937.

The second batch of 2-8-0 locomotives to appear in Australia, in 1896, was the NSWGR T class engines. The class had several overseas builders; Beyer Peacock made 151 engines; North British Co. constructed 84, Neilson & Co. constructed 10, Clyde Engineeering 30, and Dubbs & Co. 5 machines. All were in service by 1916. During World War II, 14 of these locomotives were given superheaters, which raised the tractive effort from 28,777lbs to 33,557 lbs. Several of these same class T engines were also purchased from North British Co by the Commonwealth Railways for the trans Australian railway during 1916. Some of the T series were purchased by the private line East Greta Rilway (later South Maitland) in 1912 but were converted to operate as 2-8-2 tanks. The class, was a successful engine throughout its long life, before retiring from government revenue service in 1973.

In 1924 the private coal company J&A Brown in NSW obtained three of ex-British ROD 2-8-0. Later Brown ordered another ten engines but only nine of that order arrived in Australia. The last was withdrawn in 1973.

Victorian Railways also used a range of broad gauge 2-8-0 locomotives commencing from 1899. The first engines in this classification were the V class Baldwin engines. These engines were also built at Ballarat's Phoenix Foundry. They vanished from the VR by 1930.

The first 2-8-0 engine in private service in this state arrived in 1912. There were 5 in the class and they operated until 1958 and all were gone by 1963. these were narrow gauged 3ft 6 inches locomotives(for Australian references see below)