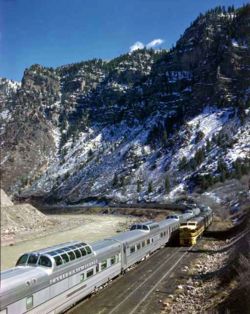 Two California Zephyr express trains meet at a railroad siding (Grizzly) in Garfield County, Colorado beside the Colorado River on March 21, 1949. The Denver and Rio Grande Western locomotives and passenger cars travel in opposite directions on parallel tracks. Placards on the dome cars read "Silver Hostel" and "Silver Pony."

"Drumhead" logos such as this often adorned the ends of observation cars on the California Zephyr.

The California Zephyr is a 2,438-mile (3,924-km) passenger train route operated by Amtrak in the Midwestern and Southwestern United States. It runs from Chicago, Illinois in the east to Emeryville, California in the west, passing through the states of Illinois, Iowa, Nebraska, Colorado, Utah, Nevada, and California. This route is one of the longest and most scenic routes run by Amtrak.

Prior to the formation of Amtrak, the California Zephyr (the CZ, or "Silver Lady") was a passenger train operated jointly by the Chicago, Burlington and Quincy Railroad (CB&Q), Denver and Rio Grande Western Railroad (D&RGW) and Western Pacific Railroad (WP), along almost the same route. The CB&Q, D&RGW and WP inaugurated "The most talked about train in America" on March 19, 1949. It was the first passenger train in regular operations in North America to use dome cars, and was purposely scheduled so that her patrons passed through the most spectacular scenery in the daylight.

The original CZ ceased operations in 1970, when its route was divided between Amtrak and the independent Rio Grande. The service was revived in 1983, when the Rio Grande joined Amtrak. 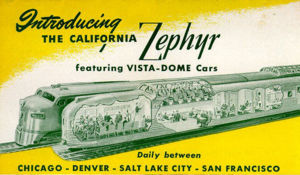 This cover of a pre-inaugural brochure for the California Zephyr features a cutaway view of the train's famed "Vista Domes."

Before Amtrak operated a train with this name, the California Zephyr was operated by the Chicago, Burlington and Quincy Railroad from Chicago to Denver, Colorado, the Denver and Rio Grande Western Railroad between Denver and Salt Lake City, Utah, and the Western Pacific Railroad from Salt Lake City to Oakland, California. Trains ran with cars of mixed ownership; cars cycled in and out of the consists for service, repairs, and varying passenger loads with the seasons.

This train was the first in the nation to use "Vista Dome" cars. The first train was christened in San Francisco by Eleanor Parker while California Lieutenant Governor Goodwin Knight, Mayor of San Francisco Leland Cutler, and WP President Harry A. Mitchell looked on. For the inaugural run in 1949, every female passenger on the train was given a corsage of "silver" and orange orchids that were specially flown in from Hilo, Hawaii. The women who worked as car hostesses on this train were known as "Zephyrettes." 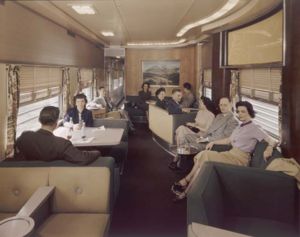 An interior view of a Denver and Rio Grande Western Royal Gorge 1290 Series lounge car as it appeared in April, 1951. Men and women sit on upholstered chairs and couches and at booths. The men wear suits and ties, and the women wear dresses or skirts and sweaters. Bottles of Coca-Cola are on a table at a booth. The windows have blinds and floral drapes and a painting of a mountain landscape hangs on the far wall. This type of car was not used on the California Zephyr.

The passenger cars used when the train was inaugurated in 1949 were as follows:

The forward section of the first Vista-Dome car was partitioned off and reserved for women and children only. There was a door in the corridor under the dome just behind the women's restroom that provided access to the reserved section. Early on however, this reserved section was opened up to all passengers and the door and partitions were removed. Like the train's operation, ownership of the cars was split between the three railroads almost evenly across all car types. Each car was owned by a single railroad, but the ownership of the cars on any specific day's run of the train depended more on what equipment was available at the terminals than whose railroad the train was operating over at the time.

Generally positioned as the second Vista Dome coach was the car referred to as the "Conductor's Car". This car was like the other Vista Dome coaches, except in the B end, was a small booth with a bench seat and desk for the Conductor's use.

In 1952 an additional Pullman sleeper (6 double bedrooms - 5 compartments) was added to regular service on this train. With the new cars delivered that year, cars arriving in Chicago on the California Zephyr were made available for use on the Ak-Sar-Ben Zephyr for an overnight round trip to Lincoln, Nebraska. When the cars returned from Lincoln the next day, they were placed back in the westbound California Zephyr's consist for the next train out of Chicago that afternoon. 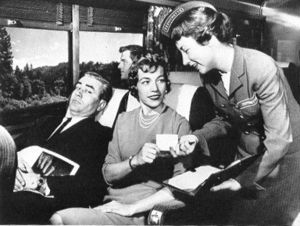 A couple receives their color-coded card indicating their dinner seating time. Their names will also be recorded on the "Zephyrette's" seating chart.

The California Zephyr was marketed (especially to families) as "...a vacation unto itself." Train hostesses, while not new to the industry in the late 1940s, were nevertheless elevated to a new level on the CZ in the form of the "Zephyrette." Literal fixtures on the trains right until the very last day of service (and considered by many to be the "heart and soul" of the California Zephyr), the "Zephyrettes" functioned as social directors, tour guides, babysitters, nurses—in short, they filled just about any role required to ensure that the passengers had a memorable trip. A pool of approximately one dozen women were assigned at any given time to the CZ in this capacity. In 1983 Amtrak revived the California Zephyr and invited one of the original "Zephyrettes" to host the first trip.

A pair of the Western Pacific's Budd Rail Diesel Cars (RDCs), operating as replacements for the discontinued Royal Gorge (trains No. 1 and 2) [1] between September 17, 1950 and October 2, 1960 also picked up the nickname "Zephyrette." Template:Sect-stub

As ridership fell during the 1960s, the Western Pacific repeatedly petitioned the ICC to drop its section of the train west of Salt Lake City without success. On February 13, 1970, the ICC released an order stating that "operation of the train was no longer required". The train's final operation was made on March 22, 1970, with a westbound train terminating at Oakland, California. The California Zephyr had operated for 20 years and 2 days. The Chicago, Burlington and Quincy continued to operate the remaining train as California Service and the Rio Grande as the Rio Grande Zephyr until May 31, 1971, though the train terminated at Salt Lake City.

With the establishment of Amtrak in 1971, the new system began operating its San Francisco Zephyr over the Chicago, Burlington and Quincy route to Denver, and Union Pacific's "Overland Route" through Wyoming instead of Colorado, then over the Southern Pacific tracks west of Ogden, Utah.

The Rio Grande railroad initially opted out of Amtrak and continued to operate its section of the former California Zephyr as the Rio Grande Zephyr. In 1983 the Rio Grande Railroad reversed its decision and joined Amtrak.

In July 1983, Amtrak ceased operation of the San Francisco Zephyr and launched operation of a new California Zephyr over the CB&Q and Rio Grande legs of the original train route. West of Salt Lake City, the route operates on the Western Pacific track to where the WP meets the old Southern Pacific track near Wells, Nevada. From Wells to Winnemucca, Nevada (where the 2 tracks meet again), the Zephyr uses the WP track eastbound and the Southern Pacific track westbound. West of Winnemucca the Zephyr uses the SP track. 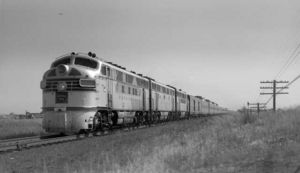 From east to west, the communities with regular station stops on this train included: 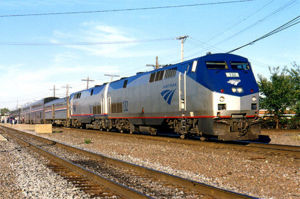 Having just arrived in Galesburg, Illinois, Train No. 5 — the California Zephyr, led by GE Genesis P42DC locomotives #132 and #167 — "cools its heels" for a few minutes before continuing west on September 27, 2004. 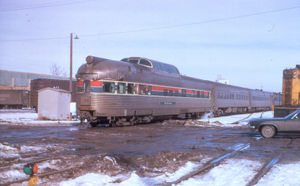 Former CB&Q sleeper-observation car #375, the "Silver Horizon" (now #9250 in Amtrak livery), brings up the rear of the California Zephyr as it passes through Chicago.