This article is about the passenger train Challenger; for other uses, see the disambiguation page Challenger. 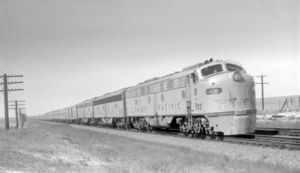 A trio of Union Pacific locomotives leads train No. 108, the streamlined Los Angeles Challenger, through Laramie, Wyoming on September 3, 1955. 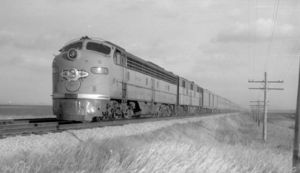 Train No. 107, the Challenger, is led by a Chicago and North Western Railway EMD E8 locomotive as it passes east of Ames, Iowa on November 23, 1954.

"Drumhead" logos such as these often adorned the ends of observation cars on the Challenger.

The Challenger was a named passenger train fleet jointly operated by the Union Pacific Railroad and the Chicago and North Western Railway (which was later replaced by the Chicago, Milwaukee, St. Paul and Pacific Railroad, better known as the "Milwaukee Road"). The economy service ran between Chicago, Illinois and several major cities located along the West Coast of the United States. Known as "Everybody's Limited," the trains offered full Pullman service and top-flight coach seating, and were introduced in an attempt to draw Depression-Era riders back to the rails. Food service was advertised as "three meals for under a dollar a day."

Throughout the late 1930s, the Challenger fleet was among the highest-patronized of American trains, and the best revenue producers of the UP passenger fleet. The train ultimately became Union Pacific's "Feature Train of the West." Discontinued in 1947, the Challenger reemerged in 1954 as a streamliner. When Amtrak took over operation of the nation's passenger service in 1971 it ended the run of the Challenger once and for all.

In early June 1935 the Union Pacific transferred the heavyweight coaches and tourist sleeping cars of its Los Angeles Limited to a second section, informally designated as the Challenger. The new train met with such success that the UP immediately ordered 68 cars rebuilt, including 47 coaches, 16 Pullman sleeping cars, and 5 dining cars. The coaches were outfitted with large, reclining chairs and decorated with a new color scheme to make the interiors more attractive, especially to women passengers. A lounge car was added to the consist in April of the following year. All cars (save for baggage cars) carried the Challenger name.

In May 1936 the train was assigned its own numbers and commenced operation between Chicago and Los Angeles, California on an independent schedule. The westbound Challenger completed its run in 39 hours and 30 minutes, while eastbound ran 39 hours and 45 minutes. These accelerated schedules trimmed 20 hours off those maintained by the Los Angeles Limited, and were the fastest ever for a UP transcontinental train. Westbound No. 107 departed Chicago at 9:00 a.m. C.S.T. and arrived in Los Angeles' Union Passenger Terminal at 10:30 p.m. P.S.T. the next day; eastbound No. 108 left L.A. at 2:00 p.m. P.S.T., and entered Wells Street Station at 7:45 in the morning C.S.T. of the second day. 1937 saw the UP partnering with the Southern Pacific Railroad to extend service from Chicago to Oakland, California, a line that would take the name San Francisco Challenger (the original run was designated as the Los Angeles Challenger). The Portland Rose Challenger, with service into the Pacific Northwest, was established shortly thereafter. 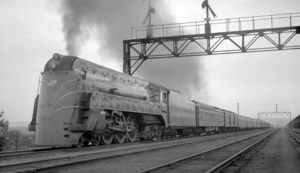 The Challenger attracted new passengers and retained its middle-class clientele through a series of innovations devised as a result of formal research as well as personal conversations between passengers, company officers, and train crews. For maximum flexibility, lounge cars were designed for single, double, and table seating. Porter service was available throughout the train, and most stations had agents on duty to assist with any passenger need. Unique in the railroad industry, two special coaches were provided at the head of the train for the exclusive use of women, one of these specifically tailored for women with children. A registered nurse-stewardess was in attendance at all times, another first. The women received $125 per month, plus expenses.

Coach passengers provided with complimentary pillows, and tickets were pouched to avoid having to awaken passengers during the night. Station calls were eliminated during the sleeping hours, and short-haul passengers were individually awakened by train crews prior to arriving at their destinations. All bright lights were extinguished during the night (only blue lighting was used after 10:00 p.m.). Lounge rooms at the ends of the coaches were provided for those who wished to remain awake.

Increased rail traffic during World War II led the UP to add the Furlough Challenger to its roster on December 31, 1944; the train's name was changed to Military Challenger on December 23, 1945 and then to Advance Challenger on April 14, 1946. The train was discontinued altogether on June 2, 1946; the entire Challenger fleet would be taken out of service the next year following the establishment of daily service for the entire City fleet. On December 8, 1953 the C&NW and UP formally announced that the Challenger service between Chicago and Los Angeles would return with all-streamlined equipment, and on January 10 of the following year the first lightweight trainset hit the rails. In February 1955, dome coaches were added to the Challenger (along with dome lounge cars and unique (to Union Pacific) dome diners on the City of Los Angeles and City of Portland) as regular equipment for the first time on any of UP's trains. 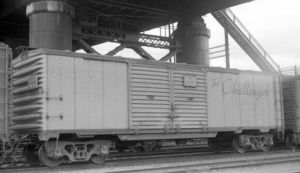 Poor track conditions on the CNW forced UP to switch to the Milwaukee Road (MILW) for service to Chicago's Union Station beginning in November 1955. The MILW embarked upon a repainting program wherein all of its passenger rolling stock and motive power received Union Pacific's Armour Yellow and Harbor Mist Gray color scheme (the MILW retained its tradition red and black livery for freight units). The Milwaukee Road received that portion of the operating revenue generated between Omaha and Chicago, and furnished 25% of the equipment used on the line. UP diesels operated west of Omaha, while MILW power was employed into Chicago.

In a cost-cutting measure, the Challenger and the City of Los Angeles were combined during the off-season beginning in 1956. To further reduce costs in the face of dwindling ridership, the Challenger, City of Denver, City of Los Angeles, City of Portland, and City of San Francisco were all combined into one giant train in 1970. At this time as well the dome diners were withdrawn from service on all UP trains, although the dome coaches and dome lounge cars remained in service until the turnover of passenger service to Amtrak. Amtrak discontinued all UP named trains, save for a modified City of San Francisco (via BN to Denver, thence via UP's Overland Route to Ogden and SP to Oakland/San Francisco), when it assumed long-distance passenger rail service throughout the United States on May 1, 1971.

A wide variety of steam- and diesel-powered locomotives served the Challenger over the course of its lifetime. 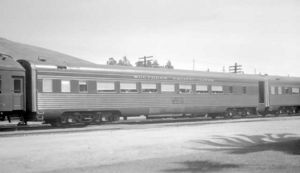 The last train No. 108 to travel over the CNW (eastbound) consisted of:

Dining aboard the Challenger 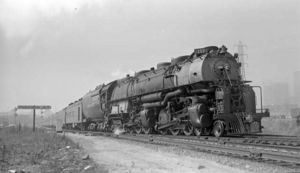 The meals served in the Challenger's dining cars, while basic (definitely not the first-class fare found aboard the UP's streamliners, where a single meal might cost as much as $1.25) were ample, served on distinctive china and in portions large enough to satisfy even the heartiest traveler's appetite. Even as late as 1954 the meal selections were priced with the budget-conscious traveler in mind: breakfast cost 65¢, lunch was 85¢, and dinner could be had for $1.00.

Other railroad uses of the name Challenger

The Challenger name has also been applied to a class of type 4-6-6-4 steam-driven locomotives designed by the UP and built by the American Locomotive Company between 1936 and 1943. Best known among these is Union Pacific 3985, one of 105 Challengers built for the railroad; it is the largest operating steam locomotive in the world.

The Challenger dome car was built in 1958 by Pullman-Standard as Union Pacific Dome Coach #7015, the last such car built. It was reacquired by Union Pacific in 1989 and today operates as part of employee and other special trains.