From TrainSpottingWorld, for Rail fans everywhere
Jump to:navigation, search
File:Old 4-4-0.jpg
Atlantic, Mississippi and Ohio Railroad #87, delivered 1873-10-27 from the Mason Machine Works of Taunton, Massachusetts. This is a 5 ft (1524 mm) gauge 4-4-0 with 54 in (1.37 m) drivers. Shown during delivery on flatcars due to gauge incompatibility. Note the elaborate ornamentation. #87 is a wood-burner with a spark-arresting Radley-Hunter type stack.
File:440woodcut.jpg
An 1880s woodcut of a 4-4-0 locomotive.
File:PRR D6 317.jpg
Pennsylvania Railroad class D6 4-4-0 #317, built in 1881. This high-drivered (78") passenger locomotive is coal-fired, indicated by the straight stack. Elaborate decoration is now out of fashion.
File:Atlantic & St. Lawrence Railroad Locomotive.jpg
Atlantic and St. Lawrence Railroad locomotive Coos circa 1856 in Longueuil, Quebec. The short wheelbases of the leading wheels, drivers and the tender bogies were soon expanded on locomotives of this type.

A 4-4-0 is a type of steam locomotive. In the Whyte notation, 4-4-0 signifies that it has a two-axle truck to help guide it into curves, and two driving axles coupled by a connecting rod. The 4-4-0 is most commonly known as the American type due to the large number of this type that were produced and used there,[1] but the type subsequently became very popular in Great Britain where large numbers were produced. Almost every major railway that operated in North America in the first half of the 19th century owned and operated locomotives of this type. The famous locomotive named The General was a 4-4-0.

The first 4-4-0 design was developed by Henry R. Campbell, then the chief engineer for the Philadelphia, Germantown and Norristown Railway. Campbell received a patent for the design in February 1836, and he soon set to work building the first 4-4-0. New locomotive construction in the USA had begun only five years earlier at the West Point Foundry with the Best Friend of Charleston in 1831.

However, with all of the increased power in Campbell's design, the frame and driving gear of his locomotive proved too rigid for the railroads of the time, thus Campbell's prototype was too prone to derailments. At about the same time as Campbell was building his 4-4-0, the company of Eastwick and Harrison was building its own version of the 4-4-0. This locomotive, named Hercules, was completed in 1837 for the Beaver Meadow Railroad. The Hercules was built with a leading bogie that was separate from the locomotive frame, making it much more suitable to the tight curves and quick grade changes of early railroads.

Even though Hercules and its successors from Eastwick and Harrison proved the viability of the new wheel arrangement, the company remained the sole builders of this type of locomotive for another two years. William Norris built that company's first 4-4-0 in 1839, followed by Rogers, Locks and Canals and Newcastle in 1840. Henry Campbell didn't sit idly by while other manufacturers started building their own 4-4-0s. Like many executives of the modern era, Campbell sued other manufacturers and railroads for infringing on his patent. Baldwin settled with Campbell in 1845 by purchasing a license to build 4-4-0s.

As the 1840s progressed, the design of the 4-4-0 changed little, but the dimensions of a typical example of this type increased. The boiler lengthened, drive wheels grew in diameter and the fire grate increased in area. Early 4-4-0s were short enough that it was most practical to connect the pistons to the rear driving axle, but as the boiler lengthened, the connecting rod was more frequently connected to the front driving axle.

In the following decade, locomotive manufacturers began extending the wheelbase of both the leading bogie and the driving axles. By placing the axles farther from each other, manufacturers were able to mount a wider boiler completely above the wheels that extended beyond the sides of the wheels. This gave newer locomotives increased heating and steam capacity which translated to higher tractive effort. It was in this decade, the 1850s that the 4-4-0 began to look like the locomotives that are preserved today. There are fewer than 40 surviving 4-4-0s in the United States today, not counting reproductions.

File:HHRRstation.jpg
A Hanko-Hyvinkää railway Baldwin 4-4-0 of 1872 vintage in front of the station building in Hanko in 1893.

The design and subsequent improvements of the 4-4-0 proved so successful that by 1872, 60% of Baldwin's locomotive construction was of this type, and it is estimated that fully 85% of all locomotives in operation in the USA were 4-4-0s. However, the 4-4-0 was soon supplanted by bigger designs, like the 2-6-0 and 2-8-0, even though the 4-4-0 was still favored for express services. The widespread adoption of the 4-6-0 and even larger locomotives helped seal its fate as a product of the past. By 1900, the 4-4-0 was obsolete in US locomotive manufacture, although they continued to serve branch lines and private industry into the mid 20th century. The last 4-4-0 built was a diminutive Baldwin product in 1945, built for the United Railways of Yucatan.

The 4-4-0 in Britain was primarily favoured for passenger services, although several types were used for mixed traffic services in later years. The first British locomotives to use a 4-4-0 wheel layout were designed by William Bouch in 1860 for the Stockton & Darlington Railway.[2]

The Great Western Railway City class 4-4-0 locomotive City of Truro was designed by George Jackson Churchward and built at the GWR Swindon Works in 1903. It was reputedly the first steam locomotive in Europe to travel in excess of 100 mph (160 km/h), reaching a speed of 102.3 mph (164 km/h) whilst hauling the "Ocean Mails" special from Plymouth to London Paddington on 9 May 1904. 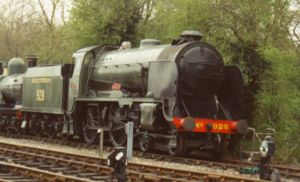 Southern Railway locomotive Stowe is a Schools class 4-4-0 locomotive designed by Richard Maunsell. The Schools class was the most powerful 4-4-0 design ever constructed: all the engines were named after public schools. This engine recorded a speed of 95 (Expression error: Missing operand for *. ) in 1938, the fastest known speed for this class of locomotive, pulling a four coach train. It was built in 1934 at Eastleigh at a cost of £5000. It recorded more than 1 million miles of service operation and, together with its tender, the locomotive weighed 110 tons.

Three examples of this locomotive design are known to survive, Cheltenham owned by the National Railway Museum, Repton owned by the NYMR, and Stowe maintained by the Maunsell Locomotive Society. Stowe was purchased from British Railways for the National Motor Museum when it was assigned to be scrapped in 1962. It was moved to the East Somerset Railway, and then to the Bluebell Railway, where it was put into running order.[3]

Another famous class of 4-4-0s were the Great Eastern Railway's Claud Hamilton Class, designed by James Holden, versions of which were later adopted by the LNER.

The type was also used widely on other British railways, particularly in Scotland and East Anglia where tracks that could take lighter weights and more restricted gauges were common.

According to Oberg, the first 4-4-0s appeared in South Australia in 1859. From that intital order for two engines, the wheel arrangement eventually appeared in the various colonies in 3 feet (Expression error: Unexpected round operator. ) gauge, standard gauge and broad gauge of 5 feet (Expression error: Unexpected round operator. ). A range of 4-4-0s engines worked Victoria, New South Wales, Western Australia and Tasmania. These engines varied from small locomotives to express passenger racers with 6 feet (Expression error: Unexpected round operator. ) drivers. Locomotives came, from English builders such as Dubbs and also Beyer Peacock & Co., from the USA's Rogers Locomotive Works in N.J. and, local colonial railways firms such as Martin & Co, and Ballarat's Phoenix Foundry. In New South Wales and Victoria, the 4-4-0 ruled the rails for main line passenger services until the early 1900s. Engines appeared as tendered, tank and saddle top versions, some were even converted in Western Australia to 4-4-2s.

The Crown Metal Products Company of Wyano, Pennsylvania built live steam reproductions of classic 4-4-0 designs between 1960 and 1989 for use by amusement parks. The largest of these ran on 3 feet (914 mm) narrow gauge track of which 18 were produced. Most are patterned after 19th century American designs, though those produced for Busch Gardens have European styling. Many of these are still in daily operation at parks such as Paramount's Kings Island , Michael Jackson's Neverland Ranch, and Omaha's Henry Doorly Zoo (see Omaha Zoo Railroad).