The Leighton Buzzard Light Railway (LBLR) is a narrow-gauge light railway in the town of Leighton Buzzard in Bedfordshire, England. It operates on a 2 ft (610 mm) gauge, and is just under 3 miles (4.8 km) in length. The line was built just after the First World War to serve the many sand quarries to the north of the town. In the late 1960s the sand quarries switched to road transport and the railway was taken over by a group of volunteers who now run the line as a heritage railway.

A bed of Lower Cretaceous sand runs across Bedfordshire and these have been quarried on a small scale for several centuries. The most significant quarries occur around the town of Leighton Buzzard. In the 19th century sand was carried by horse-drawn carts from the quarries south of the town to be shipped on the Dunstable-Leighton Buzzard railway. These carts caused considerable damage to the roads of the district and resulted in claims for compensation against the quarry owners from the Bedfordshire County Council. At the end of the century steam wagons were introduced which increased the damage to roads.

The outbreak of the First World War meant that sand supplies of foundry sand from Belgium were cut off. Sand was needed for the British ammunition factories and new sources of high quality sand were sought. Leighton Buzzard sands proved well suited to these needs and production in the region increased dramatically.

After the war ended in 1919 the quarry companies were told they could no longer transport their product over local roads, so a private industrial railway was proposed to take the traffic. 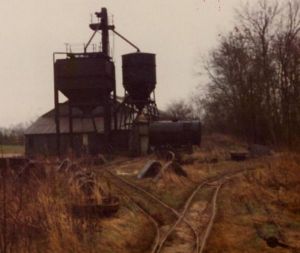 The Leighton Buzzard Light Railway opened on Thursday November 20, 1919, linking the sand quarries with the mainline railway to the south of the town. The line was originally built using surplus equipment obtained from the War Department Light Railways. The line opened using steam traction provided by two Hudswell Clarke steam locomotives. These proved inappropriate for the tightly-curved line and the steam locomotives were sold in 1921. From the point on the railway was run entirely using internal combustion locomotives, almost exclusively the products of the Motor Rail company. It was one of the first railways in Britain to be entirely operated by internal combustion locomotives.

After the Second World War sand traffic began to return to the road system. In 1953 a strike on the mainline railways pushed more traffic onto the roads. By the mid-1960s only one of the sand quarry comapnies, Arnold's, still used the light railway to carry sand.

In 1968 the line was much more lightly used, and volunteers took over the line on weekends to run passenger trains; these were the first formal passenger services to run on the line. The last sand train ran on the main line in 1969, although several of the quarries continued to used the rail lines within their quarries. These too were eventually replaced by roads and conveyor belts and the last internal quarry line was abandoned in 1981. Today the line is run purely as a heritage railway. 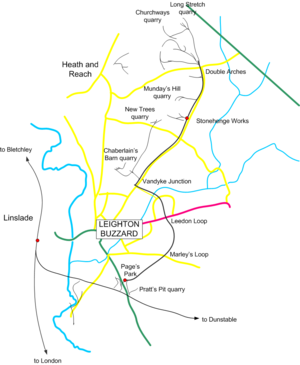 The line is somewhat unusual as it runs mostly through a modern housing estate, which was built in the 1970s, although the last half mile of the line runs through countryside. There are a number of open level crossings for which trains have to stop.

The railway began at the Grovesbury Sidings, where sand trains unloaded into a series of washers and the sand was transshipped to either standard gauge trains on the Dunstable branch or to road. The complex of sidings and industrial plant at Grovesbury was replaced with an industrial estate in the early 1970s.

Trains from Grovesbury crossed the Billington Road by a level crossing and worked up a steep grade to Page's Park. Here a branch line to the south connected to the line's main engineering workshop and the Pratt's Pit quarry. In 2006 Page's Park forms the southern terminus of the heritage railway.

From Page's Park the line curves to the north towards a summit at Red Barn. From there it descends at at gradient of 1 in 60 before climbing again to cross Stanbridge Road, past which is a loop where trains can cross. On the left is the site of Marley's Tile Works which was connected to the railway for most of its existence. The line then descends Marley's Bank at a maximum gradient of 1 in 25. Loaded sand trains running to Grovebury Sidings would often need an additional banking locomotive to climb this incline.

At the bottom of Marley's Bank the line turns sharply north and runs along the level to Leedon Loop. The line here is passing through a housing estate built in the mid 1970s. After leaving Leedon, the railway crosses the Hockliffe Road and crosses the Clipstone Brook and begins to climb again on a 1 in 50 gradient to cross the Vandyke Road.

Immediately after crossing the Vandyke Road the line curves sharply through 90 degrees to Vandyke Junction where there is a passing loop. Here the branch line from Chamberlain's Barn and New Trees quarries joined the main line. A short section of this branch remains intact although heritage trains do not use it. The railway then runs parallel to the Vandyke Road, climbing steadily to a summit at Bryan's Loop and then descending again to cross the Shenley Hill Road. The line levels and continues to Stonehenge Works now the main engineering workshop of the preserved railway. This is also the northern terminus of modern operations.

From Stonehenge the line continues northwards with a mile-long section of double track, climbing towards the two Double Arches sand quarries, owned by Joseph Arnold and George Garside.

These are the locomotives operating on the preserved railway 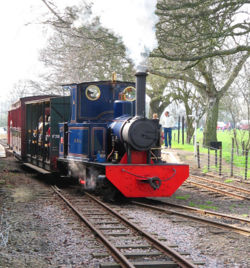 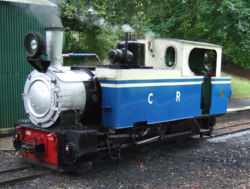 Locomotive No. 740 on shed at Pages Park 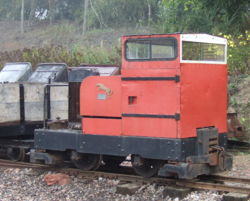