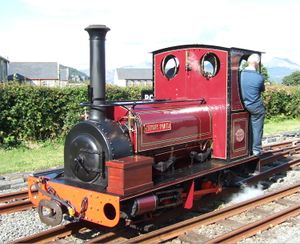 The Hunslet Engine Company is a British locomotive-building company founded in 1864 at Jack Lane, Hunslet, Leeds by John Towlerton Leather, a civil engineering contractor, who appointed James Campbell (son of Alexander Campbell, a Leeds engineer) as his Works Manager.

In 1871, James Campbell bought the company for £25,000 (payable in five installments over two years) and the firm remained in the Campbell family ownership for many years. Between 1865 and 1870, production had averaged less than ten engines per year but in 1871 this had risen to seventeen and was set to rise over the next thirty years to a modest maximum of thirty-four.

The first engine built in 1865 was Linden a standard gauge 0-6-0 saddle tank delivered to Brassey and Ballard a railway civil engineering contractor as were several of the firm's early customers. Other customers included collieries. This basic standard gauge shunting and short haul 'industrial' engine was to be the main-stay of Hunslet production for many years. From the start, Hunslet regularly sent fitters to carry out repairs to its engines on customer's premises and this is a service that the Hunslet Engine Company were still offering in 2006, over 140 years after their establishment. 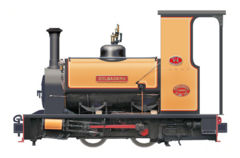 In 1870, Hunslet constructed their first narrow gauge engine Dinorwic, a diminutive 1 ft 103⁄4 in (578 mm) gauge 0-4-0 saddle tank for the Dinorwic Slate Quarry at Llanberis. This engine later renamed Charlie was the first of twenty similar engines built for this quarry and did much to establish Hunslet as a major builder of quarry engines. This quarry was linked to Port Dinorwic by a 4 ft (1219 mm) gauge line for which Hunslet built three 0-6-0T engines Dinorwic, Padarn and Velinheli. Much larger than the normal quarry type, 1 ft 103⁄4 in (578 mm) gauge 0-4-0ST engines Charles, Blanche and Linda were built in 1882/3 for use on the Penrhyn Quarry Railway 'main line' between Bethesda and Port Penrhyn in North Wales. Two of these still operate on the Ffestiniog Railway while Charles is preserved in the Penrhyn Castle Railway Museum.

The first Hunslet engine built for export was their No. 10, an 0-4-0ST shipped via Hull and Rotterdam to Java. Remarkably, the last industrial steam engine built in Britain was also built at Hunslet in 1971 and also for export to Java. This engine later returned to Britain and is preserved in working order. A large number of short wheelbase tank locomotives (0-6-0) were supplied to the Manchester Ship Canal Company and one of thes (No.686 of 1898 'St. John') still survives on the Severn Valley Railway and is still in regular use as a 'Thomas The Tank Engine' lookalike. By 1902, Hunslet had supplied engines to over thirty countries world-wide, often opening-up new markets. In Ireland, Hunslet supplied engines to several of the newly opening narrow gauge lines and also in 1887 built the three remarkably unorthodox engines for the Lartigue Monorail system used by the Listowel & Ballybunion Railway.

Change and development in the Twentieth Century

By 1901, James Campbell was still in charge as proprietor and James's four sons were, by then all working for the company including the eldest son Alexander III who had taken over as Works Manager on the death of his Uncle George in 1890. However in 1902, the company was reorganised as a private limited company with the name Hunslet Engine Company Ltd. but still a family business. Following the death of James Campbell in 1905, the chairmanship passed to Alexander III and brother Robert became works manager, whilst brother Will retained the role of secretary and traveller with a seat on the board.

About this time Hunslet was building a series of 2-6-2 tank locomotives for the Sierra Leone Government Railway and the famous Russell a 1 ft 111⁄2 in (597 mm) gauge version of this was built for the Portmadoc, Beddgelert and South Snowdon Railway, which later became a constituent company of the Welsh Highland Railway.

Following family disagreements both Will and the youngest brother Gordon soon left the company and a serious injury left Robert disabled and unable to continue as works manager. The post of works manager was advertised and Edgar Alcock, then assistant works manager at the Gorton works of Beyer-Peacock, was appointed in 1912. Alcock came to Hunslet at a time of change when the industry was being asked for far larger and more powerful locomotives than had ever been required in the past. This was true at Hunslet which found its overseas customers asking for very large engines. However by 1914, Britain was at war and overseas orders had dried up. During that was, the company, like many others, found itself employing women on the shop floor and engaged in the manufacture of munitions.

After the war, trading conditions were very difficult but Hunslet were once more able to attract overseas orders and they also received a series of repeat orders from the London, Midland and Scottish Railway for a total of 90 LMS Fowler Class 3F 'Jinty' 0-6-0T shunting engines. It was during the 1930's that Hunslet built their largest locomotives. These two 0-8-0 tank engines, built for a special train-ferry loading job in China (which they fulfilled for many years) were at that date the largest and most powerful tank engines ever built. A year or so later the same design formed the basis for an 0-8-0 tender engine for India. Many other 'large-engine' orders were received in these inter-war years.

Other independent British manufacturers failed to survive the depression and Hunslet with considerable foresight acquired the patterns, rights and designs of other builders notably Kerr Stuart and the Avonside Engine Co.

The internal combustion engine and the war effort

John Alcock, who, following in his father's footsteps, became Managing Director of Hunslet in 1958, recalled his father telling him circa 1920, when he was still a schoolboy, that his main endeavour for the company would be in the application of the internal combustion engine to railway locomotion. Throughout the 1930's Hunslet worked on the perfecting of the diesel locomotive.

During the second world war, the company again served the country well in the manufacture of munitions. But they also built engines, both steam and diesel for the war effort and this continued with renewed vigour after the war. Important in post-war production was the Hunslet flame-proof diesel engine for use in the coal mines.

The "Jack Lane, Hunslet, Leeds" works was closed in 1995, the last order being a batch of narrow gauge diesel locomotives for tunnelling on the Jubilee Line Extension of the London Underground.

Graham Lee, in business with an engineering works situated at Statfold Barn Farm near Tamworth in Staffordshire, has in 2005 and 2006 constructed two new Quarry Hunslet locomotives (named Statfold and Jack Lane) similar in appearance to Irish Mail pictured above. In January 2007 Jack Lane was offered for sale by the manufacturers for £152,750 (Railway Magazine, February 2007). The third of a series of four locomotives is curently under construction.

1. Two articulated Hunslet Engine 0-4-4-0 locomotives were supplied to the Royal Arsenal: Albert in 1934 (scrapped in 1961) and Carnegie in 1954. Carnegie was later sold, subsequently rescued and moved to the Bicton Woodland Railway in 1966 (Clarke and Veitch, 1986). She is now at the Waltham Abbey Royal Gunpowder Mills.

Hunslet Engine Co locomotives can been seen operating on railways across Britain including: