The Baldwin Locomotive Works was an American builder of railroad locomotives. It was located in Philadelphia, Pennsylvania originally, and later in nearby Eddystone, Pennsylvania.

The Baldwin Locomotive Works had a humble beginning. Matthias W. Baldwin, the founder, was a jeweller and silversmith, who, in 1825, formed a partnership with a machinist, and engaged in the manufacture of bookbinders' tools and cylinders for calico printing. Mr. Baldwin then designed and constructed for his own use a small stationary engine, the workmanship of which was so excellent and its efficiency so great that he was solicited to build others like it for various parties, and thus led to turn his attention to steam engineering. 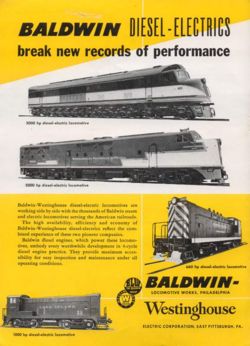 A 1945 print advertisement for Baldwin Diesel-Electrics.

In 1831, at the request of the Philadelphia Museum, he built a miniature locomotive for exhibition which was such a success that he that year received an order from a railway company for a locomotive to run on a short line to the suburbs of Philadelphia. The Camden and Amboy Railroad Company (C&A) had shortly before imported a locomotive (John Bull) from England, which was stored in Bordentown, New Jersey. It was not yet assembled by Isaac Dripps (under the direction of C&A president Robert L. Stevens) when Baldwin visited the spot. He inspected the detached parts and made notes of the principal dimensions. Aided by these figures, he commenced his task. The difficulties attending the execution of this first order were such as our mechanics now cannot easily comprehend. Tools were not easily obtainable; the cylinders were bored by a chisel fixed in a block of wood and turned by hand; the workmen had to be taught how to do nearly all the work; and Mr. Baldwin himself did a great deal of it with his own hands. It was under such circumstances that his first locomotive, christened Old Ironsides, was completed and tried on the Philadelphia, Germantown and Norristown Railroad on November 23 1832. It was at once put in active service, and did duty for over 20 years. It was a four-wheeled engine, weighing a little over five tons; the driving wheels were 54 inches (1.37 m) in diameter, and the cylinders 9½ inches (24 cm) in diameter by 18 inches (45.7 cm) stroke. The wheels were of heavy cast iron hubs, with wooden spokes and rims, and wrought iron tires, and the frame was made of wood placed outside the wheels.

Zerah Colburn was one of many engineers who had a close association with the Baldwin Locomotive Works. Between 1854 and the start of his weekly paper, the Railroad Advocate and 1861, when Colburn went to work more or less permanently in London, England, the journalist was in frequent touch with M. W. Baldwin, as recorded in Zerah Colburn: The Spirit of Darkness. Colburn was full of praise for the quality of Baldwin's work.

Initially, Baldwin would build many more steam locomotives at its cramped 196 acre (0.79 km²) Broad Street Philadelphia shop but would begin to shift production to a 616 acre (2.5 km²) site located at Spring Street in nearby Eddystone, Pennsylvania, by 1906. By 1928, the company moved all locomotive production there. Baldwin was very soon the largest locomotive builder in the United States, perhaps in the world.

An 1872 Baldwin locomotive of 4-4-0 type used on the Hanko-Hyvinkää Railroad in Finland.

Baldwin built a huge number of 4-4-0 American type locomotives, but was perhaps best known for the 2-8-2 Mikado and 2-8-0 Consolidation types. It was also well known for the unique cab-forward 4-8-8-2 articulateds built for the Southern Pacific Railroad and massive 2-10-2 for the Santa Fe Railroad. One of Baldwin's last new and improved locomotive designs were the 4-8-4 (Northern) locomotives. Baldwin's last domestic steam locomotives were 2-6-6-2s built for the Chesapeake and Ohio Railway in 1949. Locomotive production number 60,000 is on display at the Franklin Institute in Philadelphia.

On a separate note, the restored and running 2-6-2 Steam locomotive at Fort Edmonton Park was built by Baldwin in 1919.

The Baldwin works built two 2-6-2T Prairie tank engines for Victorian Railways (VR) in 1898. They were used as a trial on the new 2 ft 6 in (762 mm) narrow gauge railways. Fifteen more were built by VR. Unfortunately only six have survived and both of the original Baldwin engines were among those scrapped. 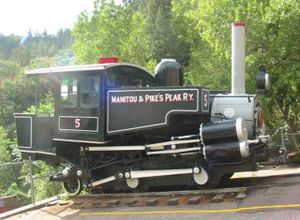 Baldwin also built three engines for the Manitou and Pike's Peak Railway, which were delivered in 1890. A fourth was delivered in 1892. These engines featured steeply inclined boilers and used the Abt rack system to propel them up the average 16% grade. Over the years, the engines were scrapped or rebuilt. The last Baldwin engine was taken out of regular service in 1955. During the following years, the engines were used as backup engines and for snow removal. Three of the engines are currently on static display around Colorado. One (No. 1) is located at the Colorado Railroad Museum in Golden, Colorado. The other two on display are located in Manitou Springs, Colorado. One (No. 2) near city hall and the other (No. 5) at the Manitou and Pike's Peak Railway depot. The fourth engine (No. 4) is still in limited operation for photo opportunities and special events. However, it no longer completes the journey to the top of Pike's Peak due to the fact that many of the water tanks along the line have been removed.

From the early years of the 20th century Baldwin had a relationship with the Westinghouse Electric Company to build electric locomotives for American and foreign markets. The electric locomotive was increasingly popular; electrification was expensive, but for high traffic levels or mountainous terrain it could pay for itself, and in addition some cities like New York were banning the steam locomotive because of its pollution and the propensity for accidents in smoke-choked terminals. Baldwin built or subcontracted out the bodywork and running gear, and Westinghouse built the electrical gear.

In the waning years of steam, Baldwin also undertook several attempts at alternative technologies to diesel power. In 1944, Baldwin outshopped an S2 class 6-8-6 steam turbine locomotive for the Pennsylvania Railroad.

Between 1947–1948, Baldwin built three unique coal-fired steam turbine-electric locomotives, designed for passenger service on the Chesapeake and Ohio Railway (C&O). The 6,000-horsepower units, which were equipped with Westinghouse electrical systems and had a 2-C1+2-C1-B wheel arrangement, They were 106 feet (32 m) long, making them the longest locomotives ever built for passenger service. The cab was mounted in the center, with a coal bunker ahead of it and a backwards-mounted boiler behind it (the tender only carried water). These locomotives were intended for a route from Washington, D.C. to Cincinnati, Ohio but could never travel the whole route without some sort of failure. Coal dust and water frequently got into the traction motors. While these problems could have been fixed given enough time, it was obvious that these locomotives would always be expensive to maintain, and all three were scrapped in 1950.

In May, 1954 Baldwin built a 4,500-horsepower steam turbine-electric locomotive for freight service on the Norfolk and Western Railway (N&W), nicknamed the Jawn Henry after the legend of John Henry, a track layer who famously raced against a steam drill and won, only to die immediately after. The unit was similar in appearance to the C&O turbines but very different mechanically; it had a C+C-C+C wheel arrangement, and an improved watertube boiler which was fitted with automatic controls. Unfortunately, the boiler controls were sometimes problematic, and (as with the C&O turbines) coal dust and water got into the motors. The Jawn Henry was retired from the N&W roster on January 4, 1958. 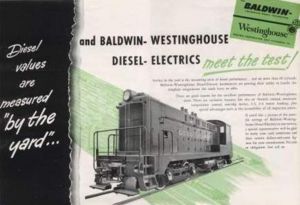 A print advertisement for Baldwin diesel locomotives from the May 25, 1946 issue of Railway Age.

In 1939, Baldwin offered its first standard line of diesel locomotives, all designed for yard service. Two years later, America's entry into World War II destroyed Baldwin's diesel development program when the War Production Board dictated that ALCO and Baldwin produce only diesel-electric yard switching engines. General Motors Electro-Motive Division (EMD) was assigned the task to produce road freight diesels (namely, the FT series), which gave the latter an advantage over its competitors in that product line in the years that followed World War II.

Business declined drastically in the postwar years as EMD and ALCO seized the bulk of the diesel market from Baldwin, Lima-Hamilton and Fairbanks-Morse. While Baldwin switchers were well-known for their lugging ability, the company failed to make the jump to building reliable road units. Baldwin also misjudged the market, concentrating on products of little interest to railroads. In July 1948, Westinghouse Electric, which had teamed with Baldwin to build diesel and electric carbodies, purchased 500,000 shares, or 21%, of Baldwin stock, which made Westinghouse the largest Baldwin shareholder. Baldwin used the money to cover various debts. Westinghouse vice president Marvin W. Smith became Baldwin's president on May 4 1949. 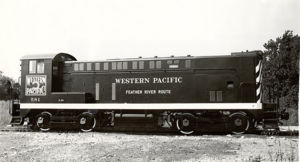 In a move to diversify their operations, Baldwin merged with Lima-Hamilton on December 4 1950 to become Baldwin-Lima-Hamilton. However, market share continued to dwindle. In 1953, Westinghouse discontinued building electrical traction equipment, and so Baldwin was forced to purchase electrical equipment from General Electric. Over 70,500 locomotives had been produced when production ceased in 1956.

Baldwin locomotives, while fairly successful in the marketplace, did not do so well as others. Baldwins, thanks to their robust Westinghouse electrical gear, were excellent haulers, but the diesel prime movers were less reliable than comparable EMD and ALCO products.