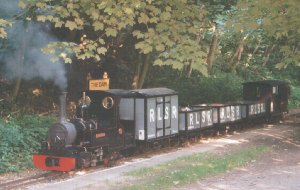 The Rudyard Lake Steam Railway is a minimum gauge railway and the third railway of any gauge to run along the side of Rudyard Lake in Staffordshire. The railway runs for a mile and a half on the track bed of an old standard gauge North Staffordshire Railway line. After the NSR line closed down, a small narrow gauge train ran on the site for two years. The current line started in 1985 and is 10.25 inch gauge, and operates to a timetable. Trains are about half the size a normal narrow gauge railway and are usually steam hauled. Trains run on Sundays and Bank Holidays from March to the end of October and Saturdays from the start of May to the end of September.

It has five steam engines named after historical characters:

The first four of these locomotives were built by the Exmoor Steam Railway A fleet of 10 carriages and a variety of goods wagons are used. 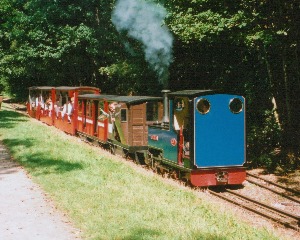 Merlin runs along the side of Rudyard Lake 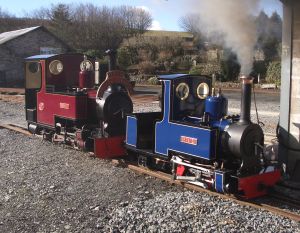 The railway offers learn to drive a steam train courses, of either a half or full day. These are highly regarded and popular presents. Special events such as Halloween are aimed at Children and are run throughout the year.

Santa trains run on Sundays in December and must be booked in advance.