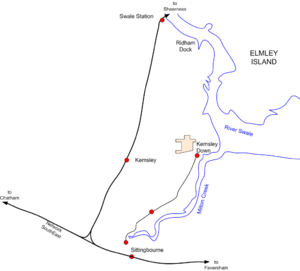 The Sittingbourne & Kemsley Light Railway in Kent is a 2 ft 6 in (762 mm) gauge heritage railway that operates from Sittingbourne to the banks of The Swale. The line was formerly owned by Bowaters, the paper making firm, and was used to carry raw materials and finished products between Ridham Dock and the company's two mills, one at Sittingbourne and the other at Kemsley.

In 1905, the horse-drawn tramway operating around the paper mill was upgraded to steam operation with the purchase of two steam locomotives - Premier and Leader - which are celebrating their 100th birthday in 2005. Other locomotives were bought for use on the railway as the network expanded (see the website for more information).

In the 1960s a time and motion study was undertaken by the owners, Bowaters UK, and the railway was deemed to be more expensive than road transport and was closed. However, Bowaters UK offered the main line, some of the locos and rolling stock of the railway to the Locomotive Club of Great Britain for preservation as a tourist railway. Other locomotives and rolling stock were sold to the Great Whipsnade Railway and the Welshpool and Llanfair Light Railway.

The main fleet of locomotives worked the railway before it was preserved. "Barton Hall" was the first new arrival on the railway in over 25 years on long term loan. In June 2006 the railway are attempting to purchase this locomotive.

Trains run every Sunday and Bank Holiday Monday from Easter to the end of September. There's an annual beer festival (with live music and hundreds of real ales), a model rail day, events at Easter and Christmas, an end of season gala weekend and other events throughout the season.