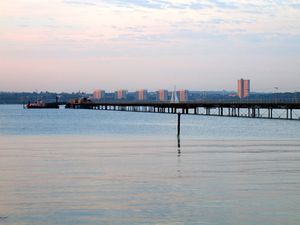 Hythe Pier from the Hythe shore 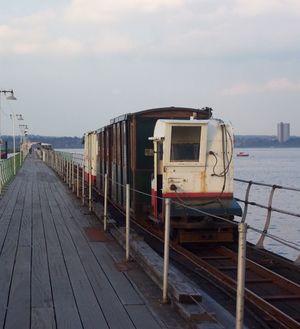 The pier with the pier train

Hythe Pier, the Hythe Pier Railway and the Hythe Ferry together provide a transport link between the English port city of Southampton and the Hampshire village of Hythe on the opposite side of Southampton Water. This link is heavily used by commuters and shoppers from Hythe, as well as forming an important link in the Solent Way and E9 European coastal paths.

The pier, railway and ferry service are currently all operated by White Horse Ferries Ltd of Swindon.

Hythe Pier stretches 700 yards (640 m) from the centre of Hythe to the deep water channel of Southampton Water. It is approximately 16 feet (5 m) wide, and carries a pedestrian walkway and cycleway on its northern side, and the track of the Hythe Pier Railway on its southern side.

Construction of the current pier started in 1879 and it was opened in 1881. 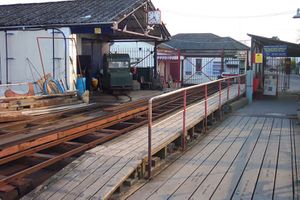 The landward station, with depot and spare locomotive 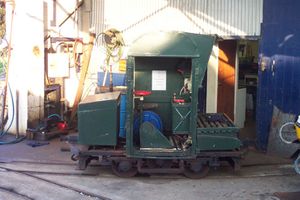 More detail on the spare locomotive 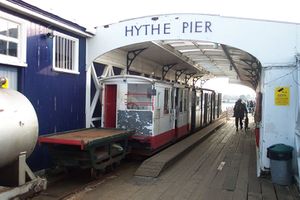 Probably at the time of the building of the pier, a narrow gauge railway was constructed for use with the transport of goods. The vehicles on this original railway were hand-propelled.

In 1922 the railway was reconstructed and electrified, attaining its current form. The track is laid to 2 ft (610 mm) gauge, and is electrified at 250 V DC by means of a third rail on the seaward side of the track. The line consists of a single track with no passing loops, although there are two non-electrified sidings at the landward end.

The line is operated by two four wheel electric locomotives built by Brush during World War I. As built these locomotives were battery powered, and were used at the wartime mustard gas factory at Avonmouth. The locomotives were transferred to Hythe after the war, where they were converted to collect power from a third rail and had their batteries removed.

The line owns four bogie passenger cars, two of which are equipped with a driving cab at their seaward ends. In normal operation, the single train in service is made up of one of the locomotives propelling three passenger cars and a four wheel flat car for baggage. The locomotive is always located at the landward end, whilst the seaward passenger car must be one of those with a driving cab. The line also possesses a four wheel oil tank car, which is used to carry fuel to the Hythe ferries. 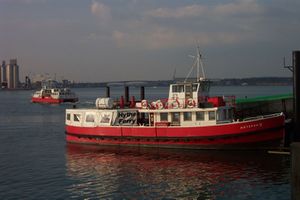 The Hotspur IV at the pier head, whilst Great Expectations departs for Southampton 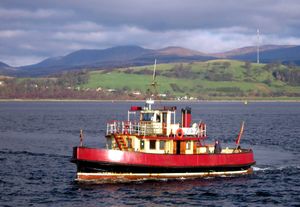 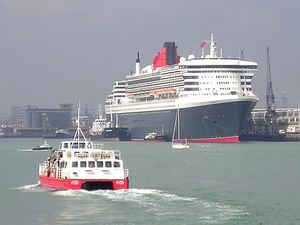 View of Queen Mary 2 from Hythe pier, with ferry Great Expectations in foreground

Each train on the Pier Railway connects at the pier head with an arrival and departure of the Hythe Ferry. The ferry service carries both passengers and bicycles, and takes about 10 minutes for the crossing. On route, the ferry passes the terminal used by the passenger liners Queen Elizabeth 2 and Queen Mary 2 on their services to New York, and also by various cruise ships, giving good views of these vessels when they are in port.

A ferry has operated from Hythe to Southampton since the Middle Ages, and steam vessels were first introduced in 1836. The current ferry service is operated with two very different vessels:

The Hotspur IV was the last in a line of similar ferries. One of her earlier half-sisters, the Hotspur II of 1936, is still in service as a ferry on the Firth of Clyde under the name Kenilworth.

In the evening of November 1 2003 the dredger Donald Redford collided with the pier, tearing a 150 foot (45 m) hole through the pier's mid-section and completely isolating the pier head from the land. Fortunately the dredger missed the pier train, and there were no human casualties, although a few minutes before the pier was crowded as people were heading home after a football match. Repairs to the pier cost £308,000 and the pier was reopened on January 7 2004.

The ferry and train operate a connecting service, which runs every half-hour seven days a week. Service start and finish times vary from day to day, but on weekdays cover morning and evening peak hours and the period in between. Later evening services are operated on Thursday, Friday and Saturday.

A single fare covers both train and ferry. Tickets must be obtained from ticket machines, which currently only take coins, and do not give change. A student discount is available, however this is only available through the ferry's own card rather than the generally accepted NUS card.

More details on both timetable and fares can be found on the Hythe Ferry website (see below).