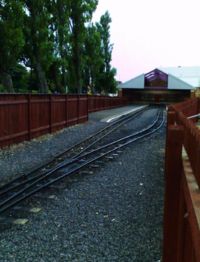 Cleethorpes Coast Light Railway is a 15 in (381 mm) railway built in 1948 in Cleethorpes, North East Lincolnshire. It was originally built to a slightly smaller gauge.

It used to be run by Cleethorpes Borough Council, but is now owned by Chris Shaw. Under his ownership the railway has expanded at its Westward end, with a bridge being built to take the line over the boating lake. A National Lottery grant enabled the railway to acquire stock from the long-dismantled Sutton Miniature Railway in the Midlands. Over the 2006/7 winter off-season, the line is being extended to the east in the direction of Pleasure Island.

In the 1960s, the line used diesel trains, followed by petrol-driven engines with a steam outline. Today however you can see genuine steam locomotives in operation, especially on guest weekends when visiting engines from other 15" lines make an appearance.