From TrainSpottingWorld, for Rail fans everywhere
Jump to:navigation, search
File:150217 'Oliver Cromwell' at Ipswich.JPG
Class 150/2, no. 150217 Oliver Cromwell stabled at Ipswich on 31st January 2004. This was the last Anglia unit to carry original Provincial livery, before it was repainted into Anglia Railways turquoise livery in March 2004.
File:HPIM1400.JPG
Class 150 no. 150003 at Birmingham Moor Street on 29th September 2007. This DMU is in By Train, By Bus, By Tram NWM livery.

The British Rail Class 150 "Sprinter" diesel multiple units (DMUs) were built by BREL from 1984-87. A total of 137 units were built in three main subclasses, replacing many of the earlier First-generation "Heritage" DMUs.

At the beginning of the 1980s, British Rail (BR) had a large fleet of ageing "Heritage" DMUs built to many different designs in the late 1950s and early 1960s. Some of the more reliable types were retained and refurbished. However, BR decided to replace many of the non-standard or unreliable types with new 2nd generation units, built to modern standards. Two different types were pursued; low-cost "Pacers" built using bus parts and used on short-distance services; and "Sprinters" based on BR's Mark 3 bodyshell design, and used for longer-distance services.

In 1984, BREL built two prototype 3-car Class 150/0 units, numbered 150001 and 150002. At the same time Metro-Cammell built two prototype Class 151 units at its Washwood Heath plant. The two types of unit were exhaustively tested, with the more successful leading to further orders for production units. In the event, the two Class 150 units proved to be more reliable, and as a result, an order for 50 two-car units was placed with BREL. Both Prototypes are still in service with London Midland. One was used as the testbed for the Class 158, being regeared to a maximum speed of 90mph and fitted with a Class 158 interior. To distingiush this unit it was reclassified as the Class 154. It has since been returned to its original state and number.

Look here for pictures and information about the testing and early days of the 150 prototypes with links to the 151s and 154 DMUs: http://www.traintesting.com/Class150.htm.

This second batch of fifty units were classified as Class 150/1 and numbered in the range 150101-150. Like the prototype units they did not have front-end gangway connections. These units were mainly concentrated around Birmingham and Manchester, and in later years were restricted mainly to commuter services.

The final batch of 85 two-car units were built with front-end gangway connections, which allowed passengers to move between two units that were working in multiple. These units were classified as Class 150/2 and numbered in the range 150201-285. They had different interiors to the earlier units and were used on longer-distance services.

Some of the Class 150/2 units were later disbanded, and the vehicles used to make some of the Birmingham and Manchester-based Class 150/1 units into 3-car sets. The units in Manchester were later returned to their original configuration, but the Birmingham-based units were renumbered into the 1500xx range by subtracting 100 from the previous number (e.g. 150103 became 150003).

There is also a DEMU using the Class 150 bodyshell on Northern Ireland Railways.

When introduced, the Class 150s had unique interior door open/close buttons that were square, blue in the North of England/Southern Scotland and Yellow/orange in the south, and lit up turquoise in the North or bright yellow in the South of England/Wales when the doors were enabled.

The illumination feature was intended to aid visually impaired people, although in today's standards these buttons do not comply with disability regulations because they are too small for disabled people to locate and have no raised braille so it is impossible to tell by feel which button opens or closes the door unless the top and bottom ones can be noticed (top is open and bottom is close.)

The blue buttons are being replaced by the standard EAO series 56 raised brialle circular door button with yellow surround to comply with the Rail Vehicle Accesibility Regulations.[1]

Only on Northern and London Midland can the original blue buttons now be spotted in the interior. London Midland units are rapidly losing them and Northern's units look set to follow. There are also no remaining Sprinters with the yellow version of the original door buttons - these Wessex Trains units were refurbished in 2003.

On the outside of units not refitted, the Door Open button is square but larger with an outside red illumination.

Arriva Trains Wales (formerly Wales and Borders) use their fleet of Class 150 units on branch line services as well as commuter services around Cardiff known as the Valley Lines. More recently (October 2006), they have been using them on the Borderlands Line Between Bidston and Wrexham.

Arriva has progressively built up their fleet of Class 150s, supplementing the former Wales and Borders units (formerly with postcard vinyls) with units acquired from various other franchises. The first expansion of the fleet was in May 2005, when a dozen Scotrail units moved to Arriva.

On 10th December 2006, Arriva Trains Wales received eight further class 150s from First Great Western (in ex-Wessex livery), as part of a national fleet shuffle. From November 2007, 10 Class 150/2 units transerred from the West Midlands as the Central Trains franchise came to an end. London Midland (the successor to Central Trains) will utilise Class 170s on Birmingham New Street to Walsall and Stafford services to enable the release of these 10 units. 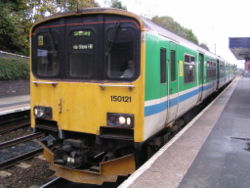 Class 150/1, no. 150121 at Kidderminster on 15th October 2004. This unit was operated by Central Trains and is shown in the Centro livery. It was transferred to Silverlink in 2005 and now carries their livery.

The fleet is based at Tyseley depot in south-east Birmingham and usage is concentrated on local stopping and semi-fast services on the Snow Hill lines - Great Malvern, Worcester, Kidderminster and Stourbridge, along the Jewellery Line to Birmingham Snow Hill, then on to Shirley and Stratford-upon-Avon, or Solihull and Dorridge. In the rush hour they can also be seen working services to Leamington Spa.

Most Centro units have now lost the centro logo, which has been replaced by a 'n' Network West Midlands sticker.

At one point they also saw use on Birmingham to Lincoln services via Leicester and Nottingham, Derby to Matlock, Nottingham to Worksop and have also seen use on the Crewe to Skegness route.

London Midland has announced that they will replace their Class 150s with Class 172s, and Parry People Movers on the Stourbridge Junction - Stourbridge Town line. The new trains will have air conditioning as well as having better acceleration.

At the time that the Wessex Trains was merged into the new enlarged First Great Western franchise, 25 Class 150/2 units were in use for regional services in South-West England. The units saw use on a wide variety of local services, including Bristol-Southampton, Bristol-Weymouth, Cheltenham-Swindon, Exeter-Barnstaple, Exeter-Exmouth, Exeter-Paignton, Liskeard-Looe, Par-Newquay, Penzance-St Ives, Plymouth-Gunnislake and Truro-Falmouth. They also worked some longer distance services over the Great Western Main Line and South Wales Main Line between Cardiff, Bristol, Exeter, Plymouth and Penzance.

Under Wessex Trains management, many of the units in the fleet had been named after local attractions. These are listed below.

All units have been refurbished with 2+2 seating (mix of airline and tables), and were repainted in a new maroon-based regional advertising livery, each featuring a different West Country postcard.

As of January 2007 First Great Western are repainting units into their 'dynamic names' livery. The named units are losing their names during the repaint

Northern Rail's fleet is a combination of Class 150/1 units, inherited from First North Western (FNW), and Class 150/2 units inherited from FNW and Arriva Trains Northern. The ATN units had previously been operated by Valley Lines but were exchanged for a similar number of Class 142 units. Another unit (no. 150228) was transferred to ATN from ScotRail.

As part of a general fleet shuffle in Northern, all Class 150/2 units are now allocated to Newton Heath depot in Manchester, in exchange for all the former First North Western Class 158 units.

File:Class-150.jpg
Silverlink operated 150128 on the Gospel Oak to Barking Line (Now Operated as of London Overground

London Overground has a small fleet of eight Class 150/1 units (inherited from Silverlink), which are employed on Gospel Oak to Barking line and also on the London Midland's Marston Vale Line. The units were originally cascaded from Central Trains following delivery of new Turbostar units. They replaced the ageing fleet of Class 117 and Class 121 "First Generation" units.

Most units have been named, three of which were transferred from the previously incumbent Class 121 units. The three units in question (marked with an asterisk) have the same last two digits as the "Bubblecars".

Leslie Crabbe was a long-standing railway employee, who worked on the Bedford-Bletchley "Marston Vale" route. Richard Crane is the chairman of the Bletchley to Bedford Rail Users Association who has campaigned for the line to be retained and expanded.[2] The previous name, "Bletchley Seven", referred to the original fleet of seven Class 150/1 units in the Silverlink fleet. The eighth unit, no. 150121 was transferred to Silverlink in late-2005.

In the short term, the units will continue to be used on the Gospel Oak to Barking Line. The arrangement with London Midland is unclear.

The units will be replaced by a new fleet of 8 two car class 172 units in December 2009 operating exclusively on the Gospel Oak to Barking Line.

As one of the most widely used types of DMU, the Class 150 fleet was divided among many different franchises at privatisation. Other operators formely making use of the fleet were:

Anglia Railways initially inherited a small fleet of nine Class 150/2 units, later supplemented with a tenth. The units were based at Norwich Crown Point depot, and put to use on rural services in Suffolk and Norfolk. Lines using the units included the Bittern Line, the East Suffolk Line, the Sudbury Branch Line and the Wherry Lines, as well as services from Ipswich to Cambridge. Anglia Railways named most of its fleet after famous local figures. 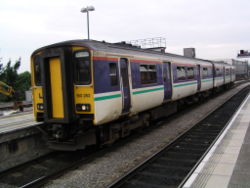 Formerly ScotRail operated 150262 at Cardiff Central railway station (although the unit was, by this point, operated by Arriva)

All units in the Anglia fleet received the company's turquoise and white livery, the last unit (no. 150217) being repainted in March 2004.

On 1 April 2004, Anglia Railways became part of the new 'one' franchise. The Class 150 units were soon transferred to Arriva Trains Wales (no. 150245) and Central Trains (all other units), having been replaced by Class 156 units cascaded from Central Trains.

In May 2005 all of ScotRail's units were transferred to Arriva Trains Wales.