The Gospel Oak – Barking Line is a train line in north and east London which connects Gospel Oak in North London and Barking in East London. It is sometimes known as the Goblin (for Gospel Oak and Barking LINe), although this is a nickname rather than an official title. Unlike most railways in London, the line does not pass through the central Zone 1 and traditionally the line has played a rather minor role in London's transport system.

Although the route between Upper Holloway and Woodgange Park has been constant, several different stations have formed the east and west ends of the route. Kentish Town, St Pancras, Gospel Oak and Moorgate (via St Pancras) have acted as western terminuses. East Ham was an alternative eastern terminus for some time. Some trains were also extended beyond Barking to destinations such as Southend and Tilbury.

The line was considered for closure in the 1960s and was then allowed to fall into a poor state of repair and reliability. By 1980 the line had been cut back to a single hourly service between Kentish Town and Barking. The station canopies were gradually demolished, the ticket offices closed and the stations unstaffed.

The situation began to improve in 1981 when the creation of Thameslink displaced the the line from Kentish Town. The hourly service was replaced by the current route between Gospel Oak and Barking with two trains per hour. The service remained very unreliable due to the age of the trains until these were replaced by the current units in 2000.

In recent years, train use has grown significantly in London with many of the lines through central London running at their full capacity. This has lead to the Gospel Oak & Barking Line taking on a new strategic significance as a by-pass, relieving the load on central London by allowing passengers to travel between north and east London directly. 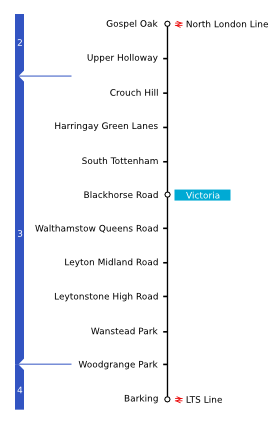 Passenger services on the line are operated by Silverlink and the typical service is one train every thirty minutes in each direction (more frequently during rush hours). The line is also heavily used by freight as it provides an orbital route around London, connecting with many radial routes, and the North London Line at Gospel Oak.

All stations on the line, with the exception of the three which interchange with other lines, are unstaffed although there are CCTV cameras and information points which can be used to speak to a member of staff in an emergency. There are no ticket machines. Tickets can be purchased from the conductors on the trains. As it is impossible for the conductors to patrol the trains when they are very crowded, the line has a very high level of fare avoidance. Oyster cards are accepted only if loaded with a travelcard season tickets for the appropriate zone(s).

All trains are diesel powered as the line has never been fully electrified. The line is overhead electrified at South Tottenham to provide a link from Seven Sisters to Stratford and again from Barking to the junction with the Great Eastern Main Line. These short sections are used only by occasional electric trains on other routes or by freight trains.

Passenger trains consist of Class 150 Diesel multiple units with two coaches each. Silverlink has a fleet of eight Class 150/1 units, which are shared between the Gospel Oak & Barking line and the Marston Vale Line.

Recent increases in passenger numbers have led to severe overcrowding at peak times. However, it is not practical to extend the trains with additional coaches because some of the station platforms would be too short to accommodate them. It is difficult to increase the service frequency as the line can only accommodate 6 trains per hour in total (in each direction) and any increase in the frequency of passenger services would reduce the number of freight trains.

Geographical layout of the Gospel Oak to Barking line

In November 2007, Transport for London will take control of passenger services as part of the London Overground, with the intention of increasing the line's service frequency and integrating it with the North London Line and West London Line. In the longer term these lines could then be further integrated with the East London Line and South London Line to form a full London orbital railway, speculatively named Orbirail. TfL has already taken over funding the Sunday service and some of the late night services, as well as funding a small number of additional peak time services in order to relieve the worst of the overcrowding.

TfL and Network Rail have made a joint submission for funding from the Department for Transport in order to upgrade the line [1]. This proposal, with an estimated cost of £20m, would improve the capacity and gauge of the line. If accepted, the work is scheduled to be carried out in 2008 to 2009 and would increase the line's capacity from 6 trains per hour to 8 (4 for passengers and 4 for goods). The gauge improvement would allow full height goods trains to operate. Electrifiction is not included in this proposal.

There are a number of other possible options for the long term future of the line. These include: