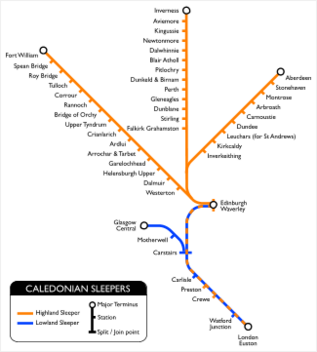 Map of the routes of the Caledonian Sleepers

The Caledonian Sleeper is a sleeper train service operated by First ScotRail and one of only two remaining sleeper services running on the railways of Great Britain – the other being the Night Riviera.

It connects London Euston station and five Scottish termini – Aberdeen, Edinburgh, Fort William, Glasgow and Inverness – six times a week (departures are daily except for Saturday nights) and also serves a number of intermediate stations. The service to Fort William is colloquially known as The Deerstalker

The service uses Mark 2 and Mark 3 coaching stock, hauled by a variety of different locomotive classes, diesel or electric - depending on the route.

Caledonian is an adjective relating to Scotland or the Scottish Highlands and derives from Caledonia, the Latin name for northern Britain.

After leaving London, The Highland Sleeper calls at Crewe and Preston for further boarding. (It is customary for the service to arrive very early and wait at the stations to depart.) At Edinburgh (where no alighting is possible) it splits into three separate trains, which continue separately to Aberdeen, Inverness and Fort William. The services call at intermediate stations en route to their final destinations. Travel between station between Edinburgh Waverley and the ultimate destinations is possible in seated accommodation subject to availability.

The Lowland Sleeper leaves London, and calls at Watford Junction to pick up passengers. The service stops to allow passengers to alight at Carlisle and Carstairs. At Carstairs it separates into two separate services, one bound for Edinburgh and the other for Glasgow, also calling at Motherwell.

From London, the train to each city consists of up to 6 Mark 3 sleeping cars, a lounge car and seated car which are both converted Mark 2F coaches. These are usually hauled by a Class 90 locomotive. After they divide at either Carstairs Junction or Edinburgh Waverley, each service will consist of a number of sleeping cars, a seating car and one lounge car. Until June 2006, a Class 37 locomotive hauled the Fort William train which is now hauled by a Class 67 locomotive, as are the portions to Aberdeen and Inverness. The locomotives are hired from EWS. In 2006, First ScotRail and EWS came to an agreement that a dedicated set of locomotives would be used for the Caledonian Sleeper, and these would be painted in First ScotRail livery, with a small EWS logo at the cab.[1]

Heading south, the Highland Sleeper trains depart from Fort William, Inverness and Aberdeen, calling at intermediate stations southwards. They merge into one train at Edinburgh Waverley before continuing their journey via Preston and Crewe (both alighting only) to London Euston. The Lowland Sleeper services depart from Glasgow (calling at Motherwell) and Edinburgh and merge at Carstairs. The merged service makes a further stop at Carlisle to pick up passengers, and arrives at Watford Junction and London Euston the following morning.

Three classes of travel are available on the Caledonian Sleeper. These are First Class, Standard Class and Seated Sleeper.

First Class and Standard Class both entitle the holder to an air conditioned cabin, with wash basin, shaver point and hand towel.

Berths are usually available prior to departure at the originating station and for a short while after arrival at the terminus.

First Class is the most expensive, but most ameniable class offered. This class of ticket entitles the holder to a private cabin consisting of a single bed, voucher to spend in the lounge car, morning tea, coffee and breakfast and a Zone 1 and 2 London Underground travel pass. Room service is also available in First Class, and First Class ticketholders are entitled to use the Virgin Trains lounge at Euston to take a shower upon their arrival in London.

Standard Class is a less costly ticket, even less so if booked more than seven days in advance, and offers a shared room consisting of a bunk bed and wash basin. Included in the price is early morning tea, coffee and a morning snack before alighting. As these cabins are designed for two people, single travellers are warned that they may have to share with a fellow passenger of the same sex.

The cheapest of the classes offered by the Caledonian Sleeper. This ticket entitles the user to an airline-style reclining seat in an air conditioned carriage, shared with up to 31 people, roughly what you would expect from a daytime First Class service. Amenities include tables, a reading light and footrests.

The lounge car permitted smoking until October 9, 2005, being the last place where it was legal to smoke on the British railway network, but it is now banned. It is highly unusual amongst British trains in having tables and chairs which are not secured to the floor.

Dogs are allowed on sleeper services, with a conveyance fee. Dogs are only allowed in single-berth cabins or where the ticket holder has exclusive use of a twin-berth cabin.

There are no showers available on the Caledonian Sleeper. However, there are showers available at Inverness, Edinburgh Waverley, and Glasgow Central for an extra charge. Only First Class ticket holders are entitled to use the shower facilities at London Euston [1]

Booking the Caledonian Sleeper services can be tricky, because there is often no differentiation between these and seated services on the National Rail booking system. First Scotrail offers an online booking service which specifically shows its sleeper services, from the syndicated National Rail database.

Ticket prices vary depending on the demand expected for the train, and time of booking. Standard Class and Seated Class both offer cheaper 'Apex' fares, if booked in advance of the date of travel and subject to availability. First Class does not offer an 'Apex' ticket, but special fares are available for travelling on weekends. Railcard discounts apply at the network standard rate of 33% in Seated Class, and at a lower rate on tickets with berths. This discrepancy is due to railcard discount being available on the travel portion of the ticket, but not redeemable against the berth. Discount rates are typically not available with the cheaper 'Apex' tickets.

Cheap tickets, termed "Bargain Berths", may be booked in advance and are allocated in very limited numbers to each service. They are available from as little as £19 and are available in Standard Class. The process of booking Bargain Berths is entirely web-based and no physical tickets are issued. It is necessary to print off the booking confirmation e-ticket as confirmation.