The Bittern Line is a railway line from Norwich to Cromer and Sheringham in Norfolk, England.

The towns and villages served by the route are listed below.

The line was opened between Norwich and North Walsham in 1874 by the East Norfolk Railway, and it reached Cromer by 1877. The rest of the line, between Cromer and Sheringham, was opened in 1887, and is the remains of the Midland and Great Northern Joint Railway line from Melton Constable. Part of that line from Sheringham to Holt is preserved as the North Norfolk Railway. It is double track as far as Hoveton and Wroxham where the line becomes single track, with a passing loop at North Walsham, and a 2 platform station at Cromer also allowing passing.

Passenger services are operated by 'one' using, Class 153, Class 156 or Class 170 diesel multiple units. The line is named after the bittern, a rare bird found in the reedy wetlands of Norfolk. The line also sees freight services taking gas condensate from a terminal at North Walsham to Harwich and a new service sending spent ballast to North Walsham for onwards sale and disposal. These freight services are operated by GB Railfreight a wholly owned division of First Group. The route is one of the most scenic in the East of England traversing the Norfolk Broads on its route to the Area of Outstanding Natural Beauty on the North Norfolk Coast. The line is often suggested to be a possible closure at times when talk of line closures is in the news, although in fact it sees good passenger numbers, which are on the increase, and has seen a number of service improvements in recent years, including 2 additional trains in the evening (one an hour after the previous last train, and one filling in a 2 hour gap before the last train), and in the next timetable will see the Sunday service improved from 2 hourly to hourly. The line was also resignalled a few years ago, leading to the closure of a number of mechanical signal boxes with control moving to a pannel in the Trowse Swing Bridge control room, although it is arguable if this is a real improvement since there have been a number of serious failures causing full or partial suspension of service during electrical storms. This is due to the system using microwave links rather than a hard wired system. This saw the end of one of the few remaining sections of single track main line controlled by tokens. The Bittern Line Partnership set up by Norfolk County Council in 1997 will be celebrating its tenth anniversary during May 2007.

The line is not electrified.

Investing in the future 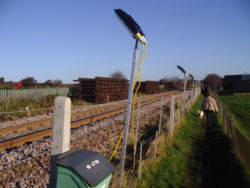 Track renewal work on the Bitten Line at Beeston Regis

In November of 2006 the essential track renewal work was began on the Bitten Line. Whole lengths of the old Track have been lifted and new rail and sleepers installed along with new level-crossing points. This will improve the ride comfort, safety and greatly reduce the noise level for neighbours of the railway track. The work was carried out by Balfour Beatty on behalf of Network Rail. The work involved lifting and removal of the old track by crane, excavating the track bed and then replacing the rail and components using a specialized track laying machine. The service on the line was cancelled during the three weeks of the first period of the track renewal. This work represents the great achievements by all concerned who have made the Norwich-North Walsham-Cromer-Sheringham a more viable railway for the future. Many thanks for this ongoing work is due to the main Bittern Line Community Rail Partnership between Norfolk County Council (excellent use of taxpayers funds), 'one' railway and other local authorities and businesses.