The Union Pacific Railroad's M-10003, M-10004, M-10005, and M-10006 were four identical diesel-electric streamliner train 2-car power sets delivered in May, June, and July 1936 from Pullman-Standard with engines and internal locomotive equipment by General Motors' Electro-Motive Division. One was for the City of San Francisco, two were for the City of Denver, and one was a spare set that ran on both routes. In 1939, M-10004 was split and converted into additional boosters for the other sets, now renumbered CD-05, CD-06, and CD-07, all running on the City of Denver. The M-10001 power car became the other third booster. In this form, the three power sets ran until 1953 when they were replaced by E8 locomotives in 1953, at which point they were scrapped.

The M-10003 through M-10006 represented the final development of the custom streamlined trainset on the Union Pacific, and showed the way toward the future of separate locomotives. As totally separable and interchangeable power sets, they were diesel locomotives in all but name. Their service life of seventeen years was longer than any other UP streamliners. 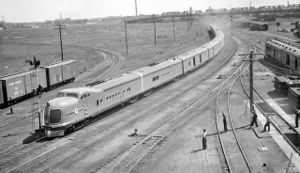 In many respects, these power sets had a lot in common with the Illinois Central's Green Diamond set, which was completed just previous to these. Abandoning the "turret cab" styling of M-10000 through M-10002, these units adopted a new "automobile design" elevated cab, as in the Green Diamond, behind a long prow of a nose. A divided front air intake grille dominated the nose front, edged in shining stainless steel. Beneath, the pilot was edged and barred in stainless steel, very like the Diamond's. A large headlight tipped the nose.

Each power car had a 1,200 hp V16 Winton 201-A engine, generator, and a pair of two-axle powered trucks. The rear truck of the first power car and the lead truck of the second power car rode on a span bolster to which both power cars were articulated, so they made one unified locomotive of B-B+B-B configuration and a total of 2,400 hp (1,800 kW). 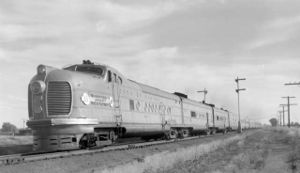 The CD-07 set in 1952, only a year before scrapping, shows its final configuration.

The most significant change to these power sets came in 1939, when they were converted from four two-car, 2,400 hp sets to three three-car, 3,600 hp (2700 kW) sets. Other changes included a gyrating signal light installed below the main headlight after the Second World War, the loss of the stainless steel trim on the pilot, the addition of the Chicago and North Western Railway herald to the nose in addition to the Union Pacific one, and changed nose-side badges for the route. At some point, the original Armour Yellow and Leaf Brown livery was changed to the UP paint scheme still used today, of Armour Yellow with Harbor Mist Gray roof and base, and red striping separating them.

Despite the earlier number, the M-10003 was actually the last completed of the four. This was because the number M-10003 had been previously assigned to a projected sister trainset to M-10001, which was cancelled when the UP and Pullman-Standard realised that demand for the new trains required more power and a longer trainset. The number was reallocated to the fourth of the new units.

The M-10003 was intended to be a spare power unit set, able to fill in on either the City of San Francisco or City of Denver if any of the other three trainsets needed maintenance. In June 1937, it was decided to permanently assign it to the City of Denver and it was renumbered to CD-07. A third power car was added in December 1939, using a new carbody and the power equipment from M-10001.

CD-07 remained in service on the City of Denver with the two other sets until March 1953, and was scrapped with them in summer that year.

First completed was M-10004 in May 1936 for the City of San Francisco. The new power cars had vertical sides and higher profiles than the previous streamliners, but the rest of the train was built to the tapered-side profile of the M-10000 through M-10002 sets. It entered revenue service on June 14, 1936 but lasted only 18 months on the train before the new EMD E2 3-unit set SF-1, SF-2 and SF-3 took over. The train was then refurbished by the UP, renumbered LA-4 and placed on City of Los Angeles service, bumping M-10002 to the City of Portland, which in turn displaced M-10001.

After less than a year as the City of Los Angeles, the LA-4 was replaced again, this time by new EMD E3s LA-5 and LA-6 in March 1939. In June of that year, the lead power car of the train was rebuilt as a booster unit, renumbered to CD-06-C, and added to the former M-10006, now renumbered as CD-06. The trailing power car was added to the former M-10005, now CD-05, as CD-05-C. Both cars were scrapped with their respective power sets.

In this form, CD-05 continued in service until March 1953, when it was replaced by new E8 units and scrapped a few months later.