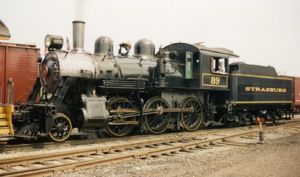 In the Whyte notation for the classification of steam locomotives by wheel arrangement, a 2-6-0 has a pair of leading wheels followed by six driving wheels. This arrangement is commonly called a Mogul. This type of locomotive was built from the early 1860s to the 1920s.

The equivalent UIC classification is 1'C.

Although locomotives of this wheel arrangement were built as early as 1852, these first examples had their leading axles mounted directly and rigidly on the frame of the locomotive rather than on a separate truck or bogie. In these early 2-6-0s, the leading axle was merely used to distribute the weight of the locomotive over a larger number of wheels. It did not serve the same purpose as the leading trucks of the Americans or Ten-Wheelers that had been in use for at least a decade.

The first 2-6-0 with a rigidly mounted leading axle was the Pawnee, built for heavy freight service on the Philadelphia & Reading. In total, about 30 locomotives of this type were built for various railroads. While they were generally successful in slow, heavy freight service, the railroads that used them didn't see any great advantages in them over the 0-6-0 or 0-8-0 designs of the time. Essentially, this design was an 0-8-0 with the lead axle unpowered.

The first true 2-6-0 wasn't built until the early 1860s, the first few being built in 1860 for the Louisville & Nashville railroad. The design that we know today required the invention of a single-axle swivelling truck. Such a truck was first patented by Levi Bissell in 1858. The New Jersey Locomotive and Machine Company built their first 2-6-0 in 1861 as the Passaic for the Central Railroad of New Jersey. The Erie Railroad followed in 1862 with the first large order of this locomotive type. In 1863, Rogers built what some cite as the first 2-6-0 built in the United States for the New Jersey Railroad and Transportation Company. 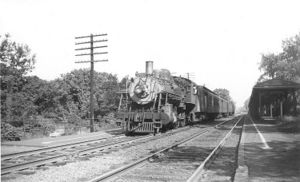 The railroads that used these first 2-6-0 examples noted their increased pulling power, but also found that their rather rigid suspension made them more prone to derailments than the 4-4-0s of the day. Many railroad mechanics attributed their derailments to having too little weight on the leading truck. In 1864, William S. Hudson, then the superintendent of Rogers, patented an equalized leading truck that was able to move independently of the driving axles. This equalized suspension worked much better over the uneven tracks of the day. The first locomotive built with such a leading truck was likely completed in 1865 for the New Jersey Railroad and Transportation Company as their number 39.

It is likely that the locomotive class name Mogul derives from a locomotive built by Taunton in 1866 for the Central Railroad of New Jersey; that locomotive was named Mogul. However it has also been suggested that, in England, it derived from the engine of that name, built in 1879 by Neilson and Company for the Great Eastern Railway.