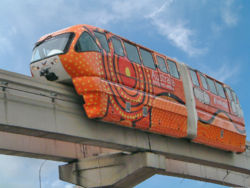 The KL Monorail in Kuala Lumpur, a colourful straddle-beam monorail 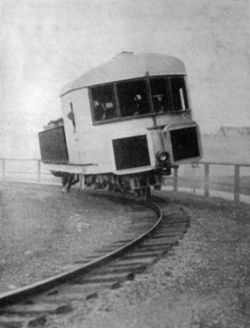 The term monorail or industrial monorail is used to describe any number of systems in which a chair or carrier is suspended from, or rides on, an overhead rail structure for the limited transportation of goods, passengers or workers.

Several attempts have been made to create a system in which a double-flanged steel wheel operates on a single rail similar to the railroad type of rail. The Wuppertal monorail described below is the only surviving monorail of this type.

Monorails have both benefited and suffered from their novelty and concept of modernity. When The Walt Disney Company placed a monorail in their Disneyland theme park in 1959, it exposed large numbers of visitors to the transportation form in a credible though miniature transit setting. At the same time, however, the Disneyland monorail and others built at other Disney properties and amusement locations have tended to identify monorails with amusements rather than practical transportation.

The popular press in the U.S. in mid-20th-century often featured monorail ideas in a "transportation of the future" context but this same press also displayed images of personal "rocket backpacks" and popular space travel, creating interest but also confusion as to which ideas were fads and which might become reality. 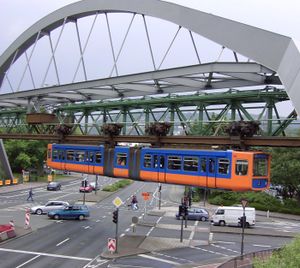 Modern monorails depend on a large solid beam as the vehicles' running surface. There are a number of competing designs divided into two broad classes, straddle-beam and suspended monorails.

The most common type of monorail in use today is the straddle-beam monorail, in which the train straddles a reinforced concrete beam in the range of two to three feet (~0.6-0.9 m) wide. A rubber-tired carriage contacts the beam on the top and both sides for traction and to stabilize the vehicle. The straddle-beam style was popularized by the German company ALWEG.

There is also a form of suspended monorail developed by the French company SAFEGE in which the train cars are suspended beneath the wheel carriage. In this design the carriage wheels ride inside the single beam.

Almost all modern monorails are powered by electric motors fed by dual third rails, contact wires or electrified channels attached to or enclosed in their guidance beams. There is a startup called Metrail who have built a hybrid prototype using diesel power to generate electricity for the motors. 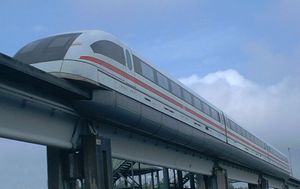 Magnetic levitation train (maglev) systems by the German Transrapid were built as straddle-type monorails, as they are highly stable and allow rapid deceleration from great speed. When in full-speed operation maglev trains actually hover over the track and are thus not in physical contact with it. It is the fastest monorail, running at up to 311 mph (501 kph). Sydney's monorail avoids switching by operating in a single loop.

Switching has been a perennial issue with monorail systems since simple switching mechanisms associated with other systems are usually not feasible. Some early monorail systems--notably the suspended monorail of Wuppertal (Germany), dating from 1901 and still in operation--have a design that makes it difficult to switch from one line to another. Some other monorail systems avoid switching as much as possible, by operating in a continuous loop or between two fixed stations, as in Seattle, Washington.

Current operating monorails are capable of more efficient switching than in the past. In the case of suspended monorails, switching may be accomplished by moving flanges inside the beamway to shift trains to one line or another.

Straddle-beam monorails require that the beam structure itself be moved to accomplish switching, which originally was an almost prohibitively ponderous procedure. Now, however, the most common way of achieving this is to place a moving apparatus on top of a sturdy platform capable of bearing the weight of vehicles, beams and its own mechanism. Multiple-segmented beams move into place on rollers to smoothly align one beam with another to send the train in its desired direction, with the design originally developed by ALWEG capable of completing a switch in 12 seconds[1]. Some of these beam turnouts are quite elaborate, capable of switching between several beams or even simulating a railroad double-crossover.

In cases where it must be possible to move a monorail train from one beam to any of a number of other beams, as in storage or repair shops, a traveling beam not unlike a railroad transfer table may be employed. A single beam, at least long enough to carry a single monorail vehicle, is aligned at an entry beam to be mounted by the monorail cars. The entire beam then rolls with the vehicle to align with the desired storage beam.

The term 'monorail' is often applied by members of the public to any modern elevated railway, particularly automated ones such as the Docklands Light Railway, Vancouver SkyTrain and the JFK AirTrain, but this usage is erroneous; these systems use the same twin rails and electric third rail as most underground metros and some main-line railways.

Monorail systems have been built in many countries around the world, many of them on elevated tracks through crowded areas that would otherwise require the construction of expensive underground lines or have the disadvantages of surface lines. 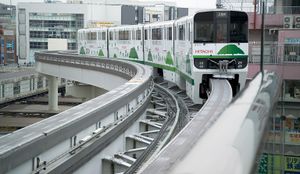 Japan has employed monorails in many cities, including: 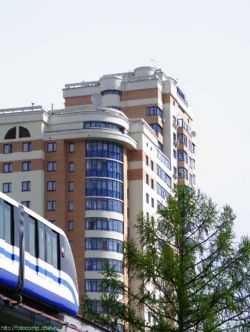 Dresden's Schwebebahn uses a similar system.
There is a smaller type of suspended Monorail (H-Bahn, "Hängebahn" or "hanging railway") at the campus of the university of Dortmund. This system is also used for the Düsseldorf SkyTrain, which operates at Düsseldorf International Airport.
There is also the experimental Transrapid Maglev ("magnetic levitation") railway system built in Emsland. This prototype was subsequently developed by a German consortium into the world's first commercial Maglev railway: the Shanghai Maglev Train which runs from the Longyang Road station on the Shanghai Metro to to Shanghai's International Airport. 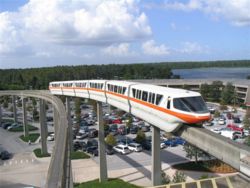 Monorails can be found in the following places in North America:

Brazil has a second monorail in the city of Pocos Do Caldes. This monorail is now decommissioned due to a failure in the track. The train sits on display at the station in the city center. [2] 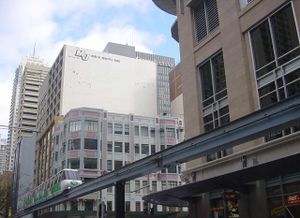 Construction has started on the following monorails.