The Disneyland Monorail System is an attraction and transportation system at the Disneyland Resort in Anaheim, California. It was the first daily operating monorail in the western hemisphere and also the first in America.

The Disneyland-ALWEG Monorail System opened on June 14, 1959 as a sightseeing attraction in Tomorrowland in Disneyland. In 1961, the track was lengthened to leave the park and stop at a station near the Disneyland Hotel. The Mark II trains were very similar to Mark I, but two extra cars were added to the train to increase capacity. In 1968, the new Mark III's, which were more streamlined and efficient than the Mark II's, debuted. There were two forms of access to the monorail. Persons who were leaving the park or persons at the hotel who had purchased tickets to enter the park could purchase a single ticket to go to the hotel or from the hotel to the entrance in Tomorrowland, respectively. Persons who had not purchased admission to the park could purchase a ticket to ride the monorail from the hotel station, into the park, and back to the hotel station. To prevent them from entering the park without paying, persons buying a monorail ticket who did not have a park admission would be loaded in a separate compartment which would remain locked until the monorail returned to the hotel.

In 1987, Disneyland began phasing out the old Mark III trains one by one. The older trains were stripped to the chassis and rebuilt as Mark V monorail trains. The notable difference was the loss of the bubble top drivers area in favor of a streamlined "Learjet" look similar to the trains at the Walt Disney World Resort. The attraction's name changed to Disneyland Monorail System. The Mark V trains were built by Ride & Show Engineering, Inc. incorporating bodies that were produced by Messerschmitt-Bolkow-Blohm of Germany. The 1987-1989 Mark V trains were named by the color of the stripe on the train: Monorail Red, Monorail Blue, Monorail Orange, and Monorail Purple.

In 1999, the monorail began lengthy closures and limited capacity due to the construction of the new Disney's California Adventure theme park, which already existing monorail tracks passed through. In 2001, the monorail began running full capacity again and passed through the new park, as well as the hotel within the park, Disney's Grand Californian Hotel & Spa. In 2004, Monorail Orange was taken off the line and taken to Walt Disney Imagineering in Glendale to be reverse engineered. Monorail Blue was removed from service in September 2006 and was shipped away to also be rebuilt. The monorail was closed from August 21 through late December 2006 to prepare for the opening of Finding Nemo Submarine Voyage in 2007. The new Mark VII trains are scheduled to be completed and installed by 2007, with a whole revamp of the system, including a name change (Disneyland Resort Line) and aesthetic changes to cast member uniforms and stations. From what Cast Members say, the new Mark VII Monorails are supposed to go online sometime in April 2007.

The Disneyland Monorail has two stations: one in Tomorrowland, and another in Downtown Disney. The original Monorail was a round trip ride with no stops. In 1961, the track was expanded to connect to a station at the Disneyland Hotel, making it an actual transportation system. The original Hotel station underwent extensive remodeling during construction of the Downtown Disney district, while still retaining much of its original footprint. It is now referred to as Downtown Disney Station, located next to the Rainforest Cafe. All riders must disembark at Tomorrowland Station.

Starting in February 2006, the Monorail operated in "shuttle mode", providing one way service between Tomorrowland and Downtown Disney, using the more direct portion of the track that passes over Disney's California Adventure. All riders are asked to disembark at both stations. This is due to construction of the Finding Nemo Submarine Voyage, over which part of the Monorail track passes. Starting August 21, 2006, the monorail was closed for station upgrades and construction related to the Finding Nemo Submarine Voyage. The monorail reopened in late December 2006, again operating in shuttle mode. 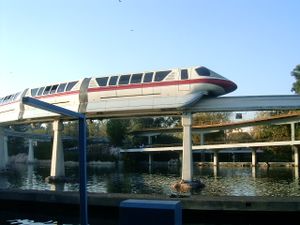 A concept drawing of the Mark VII Monorail.