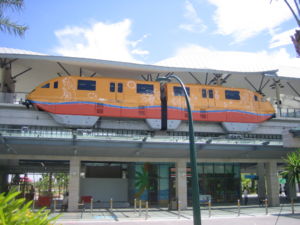 A train at Beach Station during a test run

The Sentosa Express (Chinese: 圣淘沙捷运) is a monorail line connecting Sentosa to HarbourFront in Singapore.

Built at a cost of S$140 million, it is the first to use Hitachi's "small" straddle-type monorail. Construction of the track and stations started in 2003 and was completed in June 2006.

The line opened on 15 January 2007, with three stations along its 2.1 kilometre double-track route. A fourth station, Waterfront, will open in 2010 when Resorts World Sentosa is completed.

Four two-car trains, each sporting a different colour, ply the route in eight minutes. The trains can move up to 4,000 passengers an hour. With a capacity of about 120 people per train, it departs every five minutes during peak hours and every eight minutes during off-peak times. All Station have platform screen gates or doors: Sentosa Station have full screen doors and other stations have half of the screen doors.

It was not constructed by the Land Transport Authority and is thus not considered part of Singapore's rail network.

S$26 million was spent on the stations and depot. Other than Sentosa Terminus, all of the other three stations on the line are non-air-conditioned and are the first and, currently, the only train stations in Singapore with half-height platform gates. The three also have bi-directional escalators and a lift each to take passengers from the station concourse to the platform level and vice versa.

The single day Sentosa Pass (S$3) allows unlimited rides on the Sentosa Express, Sentosa Buses & Trams, including admission into Sentosa. The Sentosa Pass can be purchased at any operational Sentosa Express Station. Payment can be made via cash, NETS or credit card, but the EZ-link card used for other public transportation in Singapore is not accepted.