The Seattle Center Monorail is an elevated monorail line in Seattle, Washington, that runs one mile along Fifth Avenue from Westlake Center in Downtown to Seattle Center in Lower Queen Anne. It claims to be the "only fully self-sufficient public transit system" in the United States, and with a top speed of 50 mph (80 km/h), to also be the fastest full-sized monorail in the country. The monorail trains and their tracks were given historical landmark status by the Seattle Landmarks Preservation Board April 16, 2003.

The monorail, which cost $3.5 million to build, opened on March 24, 1962 for the Century 21 Exposition, a World's Fair being held at the current site of Seattle Center. Eight million people rode the monorail during the half year the fair was open; today, annual ridership is around 2.5 million.

At the northern end of the line, the Experience Music Project building was designed so that the monorail passes through it on its way to the terminal.

Originally, the south end of the line was a large station in Westlake Park that formed a lid over the park. In 1988, the station was moved north a block with the construction of the Westlake Center shopping mall. In order to fit the design of the mall the tracks were moved closer together, such that there is only room for one train to occupy the Westlake Center station at a time. This design decision introduced a collision risk at the station that was eventually realized in 2005. 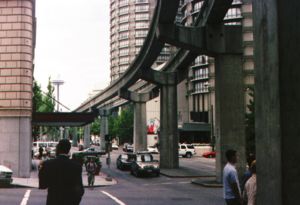 The monorail tracks with the Space Needle visible in the distance

The Seattle Center Monorail operates daily. It departs every 10 minutes from the station at Seattle Center enroute to Westlake Center Mall, at Fifth and Pine Street. Each trip takes two minutes to cover the approximately one mile route. Each train can carry up to 450 passengers per trip. The Monorail provides two-train service during special events and activities, with departures every five minutes or less.

Round-trip fares are $4.00 for adults, $1.50 for youth ages 5-12, $2.00 for senior 65+, disabled (with valid Regional Reduced Fare Permit), and persons with Medicare cards. One-way fares are half of the round-trip price. Children four and under ride free.

In November 2002, Seattle voters approved the construction of a new 14-mile monorail line. The "Green Line," as it was known, was to be the first of five monorail lines running throughout the city. Partial service was scheduled to be available in 2007, and full service was scheduled for 2009. Due to the route chosen from Queen Anne to Downtown, the existing monorail line was to be demolished as part of that project. The Green Line project was terminated by a public vote in November 2005 after concerns were raised about its financing plan.[1] 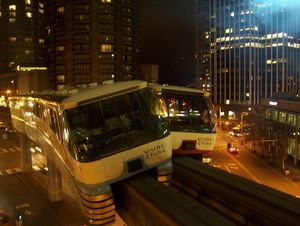 The train on the right was approaching the station, and should have yielded.

On July 25, 1971, a brake failure on the red train resulted in it striking the girder at the end of the track in the Seattle Center station, causing injuries to 26 passengers. In 2002 and 2003. passengers were evacuated by ladder after trains stalled on the track.

On May 31, 2004, a fire broke out on the monorail with 150 people aboard. No one was killed; five passengers were taken to the hospital, none of them burned. The line was closed until December 16, 2004, when service resumed with one of the two trains (the "red train," newly fireproofed) in operation. 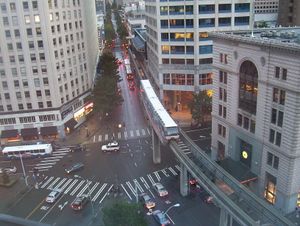 This train is in the approximate location of the accident in November 2005. Note how the space between the tracks narrows approaching the station.

On November 26, 2005, the two trains clipped one another on a curve, shearing the door off one train, smashing glass, and raining shards over passengers. Two people were hospitalized with minor injuries; no one else was seriously hurt. Poor design and driver error were blamed for the crash. In 1991, the South ends of the monorail tracks had been adjusted closer to each other to make room for the Westlake Center.

The Monorail reopened for service on Friday, August 11, 2006, but was quickly beset with problems two days later when the blue train stalled just short of Seattle Center[2] and another breakdown on August 19 that trapped over 200 passengers in the blue train at almost the exact same spot as the prior week's breakdown.[3] The monorail was out of service for almost three months to see if all problems had been fixed,[4] with service being restored once again on November 8, 2006. However, the restoration came with a decrease in passenger capacity to no more than 200 people per train.[5] 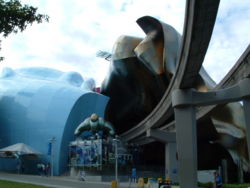 The monorail passes through the EMP building.