From TrainSpottingWorld, for Rail fans everywhere
Jump to:navigation, search
This article or section does not cite its references or sources.
Please help improve this article by introducing appropriate citations. (help, get involved!)
This article has been tagged since October 2006. 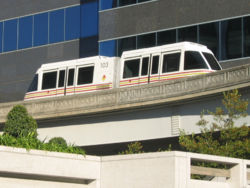 Looking south at the south end of the Acosta Bridge, with the Jacksonville Skyway in the median.

The idea of a "people mover" in Jacksonville dates back at least to a 1971 report for the Jacksonville Area Planning Board. Work began in 1984, and the first leg opened in 1989.[2] The second phase and third phases, including the river crossing, were completed by November 1, 2000.

The Skyway has been one of the biggest points of contention in Jacksonville. Many critics say it goes "from nowhere to nowhere." 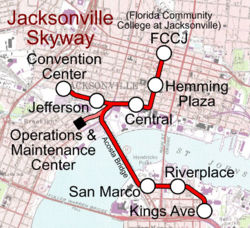 Nonexistent stations used only for testing: