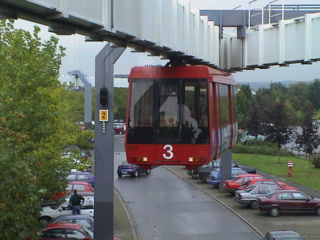 The H-Bahn in Dortmund ("Hängebahn", or "hanging railway") is an automatic passenger monorail system. The system is manufactured by Siemens, who call the project SIPEM (SIemens PEople Mover). As the name suggests, the cars travel above the ground, attached to the track by their roofs. The system outwardly resembles the Schwebebahn in Wuppertal. In contrast to the Schwebebahn, the H-Bahn needs no drivers, it is driven automatically and is supervised from a control centre. The system can operate on a schedule or on-demand, whereby a passenger requests a carriage via the push of a button (much like an elevator).

The first publicly-funded overhead railway has run since 1984 at Dortmund University, where it initially just connected the north and south campuses. This stretch was opened on May 2, 1984, by Dr. Heinz Riesenhuber, and comprised 1.05km (0.65 miles) of track and two trains. The costs was approximately DM 24,000,000 (€12,270,000), of which 75% was funded by the German Federal Government, 20% by the state of Northrhine-Westphalia and 5% by the city of Dortmund. The greatest distance between two pillars is 38.5 metres (126.3 feet), where it spans the university road, which bisects the two campuses. Just after the road, the H-Bahn crosses through a nature reserve at its maximum altitude of about 16 meters (approx. 50 feet). In order to stop passengers getting close to the track at stations, there is a glass partition between the platform and the track. As soon as the vehicles arrive in the station, doors in the partition open automatically, as do the doors of the trains themselves.

In 1993, following a three year construction period, a new 900 m (0.56 miles) long branch was opened, along with two new stations, one in Eichlinghofen and another at the train station at Dortmund university. This construction included technology considered to be the first of its kind in Germany. The existing system was renovated, and equipped with technology which allowed checking the train's distance travelled with a much higher precision. This detection system can place the train to within 3 centimetres (1.2 inches). These changes allowed for a higher speed, and trains can now also follow each other more closely. Three new carriages were supplied by Siemens. An extension into the nearby technology park was opened on December 19, 2003, which means the current network, including this final 1.2km (3/4 miles) extension, has a length of 3.162 km (approx. 2 miles). The building of this section cost around €15,500,000.

Line 1 operates between the Technology Park and Eichlinghofen, and during the day carriages arrive every ten minutes, stopping at the university and the tram stop, where there is a connection every twenty minutes to Dortmund city centre, and Bochum. Two trains serve line 1.

Line 2 is the original line between the North and South campuses of the university, and is served by a third train. As reserve a fourth vehicle is available, and there is also a maintenance vehicle.

Further extensions to the H-Bahn network are being considered: