The Talyllyn Railway (Welsh: Rheilffordd Talyllyn) is a 2 ft 3 in (686 mm) narrow gauge preserved railway line running for 7¼ miles (11.67km) from Tywyn on the Mid-Wales coast to Nant Gwernol. Despite its name it does not quite reach Talyllyn Lake, a large glacial finger lake at the foot of Cadair Idris.

The line was opened in 1865 to serve the Bryn Eglwys slate quarry above the village of Abergynolwyn. It used steam locomotives from the start, unlike its neighbour the horse-drawn Corris Railway. The original two engines were purchased from Fletcher, Jennings & Co. of Whitehaven in Cumbria, and both are still in service, 140 years on, but so many of their parts have been replaced down the years that much of their present-day component metal is not original. The Talyllyn's unusual gauge is thought to have been adopted because of the Corris.

The line's two original steam locomotives were among the earliest engines built for such a narrow gauge. No 1 Talyllyn is an 0-4-2ST and No 2. Dolgoch is an 0-4-0WT. The line carried both slate from the quarry to the wharf at Tywyn and passengers. It rarely made money and was kept going by successive quarry owners to serve the transport needs of the isolated Bryn Eglwys quarry.

The line survived almost unchanged through the Victorian era and both World Wars. During this time it retained its original locomotives and passenger carriages, never needing new or replacement stock. By the end of the 1940s the line had fallen into a parlous state of repair with only one working locomotive, and trains had become rare and unreliable. The line was owned by the local member of Parliament, Sir Henry Haydn Jones, who paid for the railway's losses from his own pocket. When he died in 1950 it seemed certain the line would close.

Locomotive No. 2 Dolgoch at Abergynolwyn in 1951, early in the preservation era

In the immediate post-war period the line decayed as traffic dwindled and the railway survived only through the benevolance of its owner, Henry Haydyn Jones. In 1950 an appeal by Tom Rolt (an enthusiastic passenger on the railway) in a local Birmingham newspaper resulted in a meeting being held at a popular hotel in the city. It was decided that due to the interest expressed at the meeting an attempt to save the railway would be made. The Talyllyn Railway Preservation Society (TRPS) was formed with the intention of acquiring and preserving the railway. Although railway preservation was in its infancy this was not the first scheme to attempt to take over a railway. Interest in the Ffestiniog Railway had been growing since 1948.

Through the 1950s the dedicated volunteers and staff members of the TRPS rebuilt the line and rescued it from its state of decay. They purchased the two remaining locomotives from the recently closed Corris Railway, and scoured the country for new carriages. Slowly the line revived. The challenges of the first years of the revival are described in Rolt's book Railway Adventure.

In the preservation era many remarkable achievements have been made. Pendre has been completely redeveloped with two new carriage sheds built in the 1960s and 1970s. The works has been modernised with professional machine tools, adequate power and lighting and proper facilities for staff and volunteers. The railway is a big employer in Tywyn with many traditional skills being kept alive at the works.

Tywyn Wharf has been rebuilt twice with the most recent rebuild comprising of a new building and enclosing the museum properly within the premises for the first time. Expanded shop and catering facilities have also been provided for but the old building containing the booking office and control (operations) office have surivived the rebuilding. Abergynolwyn has been rebuilt twice as well in the preservation era. More recently a new cafe extension was added in the 1990s to provide a delightful attraction at the end of the line.

Regarding rolling stock the railway responded to the growing popularity of its service in the 1950s, 1960s and 1970s by building new rolling stock and acquiring more steam locomotives. The first 'new' steam locomotives arrived in 1951 from Swindon Works. They had previously been employed on the neighbouring Corris Railway which also used the unusual gauge of 2'3". These locomotives arrived by rail and were unloaded at Tywyn. No.3 became the first new engine to travel on the railway for over 90 years in 1951 but it proved too unreliable due to the poor condition of the track and the thinness of its wheel flanges. No.4 was unserviceable when it arrived but due to a generous donation from the Hunslet Company it received a free overhaul at their works.

The Talyllyn Railway is now a successful and popular tourist attraction. The two original locomotives from the 1860s still run regularly along with the Corris engines and several other steam locomotives. The railway is currently facing the challenge of the modern and competitive tourist market. Despite falling passenger figures in recent years the railway is still a popular attraction in southern Gwynedd.

The Talyllyn Railway is well known for the number of Young Members (14 - 25) it has [citation needed]. Many of them volunteer from the age of 14 and eventually learn to drive, fire and guard the trains. They hold a bi-yearly Young Members Day in which the youngest people available that day run the railway .

The Young Members Group is also well known in narrow gauge railway circles for its love of completing jigsaws [citation needed]. Most Young Members stay at the railway's hostel, Llechfan, and are commonly known as 'Llechfanites'. 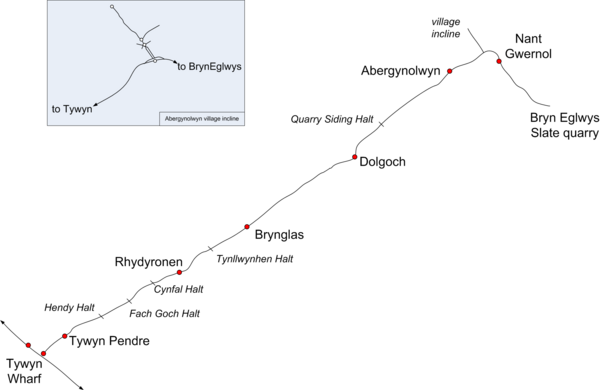 Map of the Talyllyn Railway

The line has six steam locomotives for passenger trains and four diesel locomotives that usually only haul works trains. Because of the unusual gauge, there has only been one visitor - Motor Rail Simplex diesel No. 5 "Alan Meaden" from the Corris Railway.

The line in fiction

The Talyllyn Railway is represented in The Railway Series by Rev. W. Awdry as the Skarloey Railway, with most of the fictional locomotives being based on real-life equivalents. Rev. Awdry visited the line on a family holiday and became involved as a volunteer soon afterwards. Several of the stories on the Skarloey Railway come from real-life experiences at the Talyllyn, and a number of the books contain full-page illustrations of Talyllyn locomotives. Locomotive No 6, Douglas is currently running as "Duncan", his Skarloey Railway counterpart. Sir Haydn and Edward Thomas have run with similar guises in the past.

The preservation of the Talyllyn Railway by volunteers was the inspiration for the film, [The Titfield Thunderbolt.