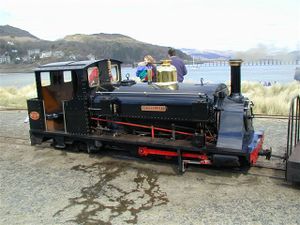 Beddgelert, a model of an engine from the North Wales Narrow Gauge Railways.

The Fairbourne Railway is a privately owned miniature railway in North Wales. It runs for 2 miles from the village of Fairbourne (near the Fairbourne standard-gauge station) to the end of a peninsula, where there is a connection with a foot ferry across the Mawddach estuary to the seaside resort of Barmouth/Abermaw. The track is laid to a gauge of 12¼ inches.

Steam locomotives run most of the services, some of the locomotives are approximately half-size replicas of locomotives running on existing narrow-gauge lines such as the Darjeeling Himalayan Railway and Lynton and Barnstaple Railway

The Railway has run from Fairbourne village to Penrhyn Point since 1895.

With the arrival of the Cambrian Coast Line and the construction of the Barmouth Bridge there were schemes to develop the area for tourism. There were several horse drawn construction tramway in the area, the tramway that was used to construct the village became the Fairbourne Railway.

Beginning life at 2 ft (610 mm) gauge, the line was converted to a 15 inch gauge steam railway in 1916 by Wenman Joseph Bassett-Lowke and Miniature Railways of Great Britain. It played an important part in the development of the 15 inch gauge railways in the UK.

The railway had mixed fortunes during the inter war years (at one time it was leased to the ferrymen) and at another time it experimented with dual gauge track after trying to solve a motive power shortage by buying a locomotive of a different gauge (18 inch). The line closed in 1940 after operating its final year with a Lister 'Railtruck' petrol locomotive.

The railway was rescued by a consortium of Midlands businessmen in 1946 and after rebuilding, was reopened by 1947. The line's owner John Wilkins funded the redevelopment of the railway and the purchase of new steam locomotives. The heyday was in the 1960s and early 1970s but the advent of mass foreign holidays meant there was a steady decline in the 1970s and 1980s.

The line's ownership changed in 1984 to the Ellerton family and was re-gauged to 12¼ inches in 1986. Four new steam locomotives were introduced, two of which had run on the Réseau Guerlédan in Brittany in 1978. All four steam locomotives are half sized replicas of narrow gauge engines: Yeo, Sherpa, Beddgelert and Russell. Of the extant 15 in gauge locomotives only Sylvia (rebuilt at Lilian Walter) remained.

The railway was again put up for sale in 1990 and the line's fortunes appeared to be declining once again. During the five years it was up for sale the railway deteriorated dramatically.

The current owners Prof. & Mrs Atkinson and Dr & Mrs Melton bought the line in April 1995. There has since been considerable investment in the railway and Rowen Nature Centre. The Rowen Nature Centre named after Fairbourne's beach's original name "Ro-Wen," is located on Fairbourne station, and houses a variety of local wildlife. The railway runs daily between April and September, with special events throughout the season including the "Friendly Fairbourne Engines" events, and Santa Specials.

In the 2000s Chris Price was appointed Chief Mechanical Engineer.

Locomotives that have previously run on the Fairbourne Railway: