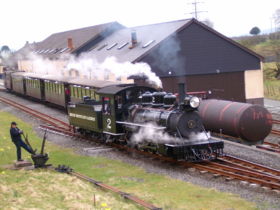 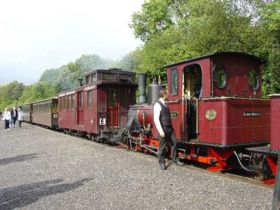 The Brecon Mountain Railway is a narrow gauge preserved railway that runs through the Brecon Beacons along the full length of the Taf Fechan Reservoir. It is located three miles north of Merthyr Tydfil.

The line runs along part of the trackbed of the northern section of the former standard gauge Brecon and Merthyr Railway from Pant to Pontsticill and then to Dolygaer. The purpose of the line is to take tourists into the Brecon Beacons National Park in preference to them entering with their cars. Plans exist for the line to be extended as far as Torpantau, at the southern entrance to the tunnel that carried the line through the hills, along the side of Glyn Colwen and as far as Brecon.

The line has unusual locomotives and rolling stock, with American Baldwin-built Pacific and an 1890-built German 0-6-2WTT Graf Schwerin-Lowitz. Coaching stock is American in style with open-ended ends.