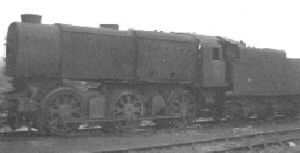 33038 at Bricklayers Arms in London during BR era. 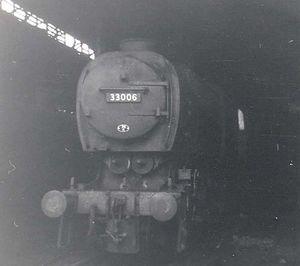 The Southern Railway Class Q1 is a type of steam locomotive, and represents the ultimate development of the British 0-6-0 freight engine.

In late 1939 the Southern Railway, until then primarily a high-density commuter railway serving London and South-East England, suddenly found itself on the British frontlines of the Second World War.

The railway became an essential strategic war asset, and desperately needed to equip itself to handle freight in the vast quantities required for the defending forces, and later (as 'D-Day' approached) for the invading armies, as well as very large volumes of troop movements. The railway's innovative Chief Mechanical Engineer, Oliver Bulleid, designed the Q1. Anything larger than a six-coupled design (such as a 2-8-0) would have presented problems in terms of axle loadings, so an 0-6-0 design was chosen. It contrasted strongly with the Q Class 0-6-0 of 1938, designed by Bulleid's predecessor Richard Maunsell which had been built to essentially Victorian era principles.

Using the minimum amount of raw materials, and with all superfluous features stripped away, he produced in 1942 the most powerful 0-6-0 steam locomotive ever to run on Britain's railways. Prodigiously powerful and extremely light, the forty Q1s formed the backbone of the Southern's heavy freight capability. The engine weighed less than 52 tons, and could be used over more than 97% of the Southern Railway's route mileage.

The class was one of several built under the wartime 'Austerity' regime, which stressed pure functionality above any considerations of style or decoration. This explains their (to many) bizarre appearance. One aspect of their shape was that (like the same designer's "West Country" and "Merchant Navy" classes) they could be simply driven through a coach-washer for cleaning at a time when manpower for this time-consuming chore could not be spared.

They not only thrived during the War, they were retained in service until the 1960s, which saw the end of steam operations on Britain's railways. Whilst they remained primarily freight locomotives, they were also frequently used on secondary passenger services.

Bulleid numbered the engines (using the UIC classification system) C1 to C40, but after nationalisation they were renumbered into British Railways' standard system as 33001 to 33040. BR classified them as power classification 5F: no other 0-6-0 exceeded 4F.

The Q1 was the last class of 0-6-0 main line steam locomotive ever built in Britain. Later designs of medium-powered freight locomotives such as the LMS Ivatt Class 2 2-6-0 and LMS Ivatt Class 4 (which were themselves later developed into British Railways standard types) all had a 2-6-0 wheel arrangement. 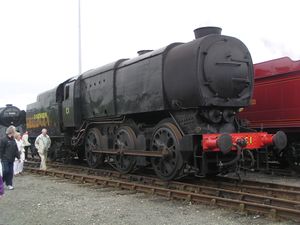 Only one locomotive from the class survived into preservation. The first one built (C1) is now part of Britain's national collection and, having worked for some years on the Bluebell Railway in Sussex, has been returned to the National Railway Museum in York, where it now carries its original SR livery and number.

An example of a Q1 engine can be seen in the new Thomas the Tank Engine and Friends TV Series. The character, named Neville the Black Engine, was at first mistaken for a diesel engine by the other engines on Sodor.