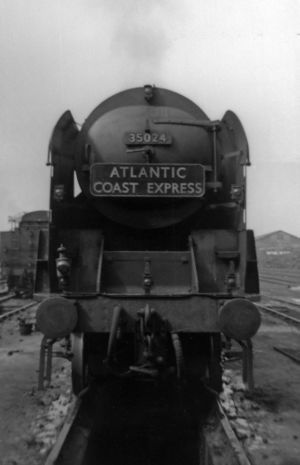 The Southern Railway (SR) Merchant Navy Class is a class of 4-6-2 steam locomotive designed by Oliver Bulleid for express passenger work. Thirty were built incorporating a number of novel design features, including an oil bath for the chain-driven valve gear, oval smokebox door and an unusually shaped smokebox. The SR considered naming them after cathedrals, then victories of World War II (a mocked-up nameplate "Graf Spee" was produced). They were eventually named for the major shipping companies of the time, a few of which still exist.

The SR number adapted the UIC classification system where "2" and "1" refer to the number of leading and trailing axles respectively, and "C" refers to the number of driving axles - in this case three. All the locomotives therefore carry the prefix 21C. The final batch of ten engines was built after nationalisation and never carried an SR number: their BR number is shown below.

The class were built in three series:

The novel features mentioned earlier caused trouble, and BR, under RG Jarvis, set about rebuilding the entire class. The first, 35018 "British India Line", emerged from Eastleigh in 1956. The last, 35028 "Clan Line" was outshopped in 1960.

The last few engines in traffic survived until the end of steam on the Southern Region in the summer of 1967.

The SR West Country Class and the identical SR Battle Of Britain Class were lighter versions of the basic Merchant Navy design.

Many of the class have survived into preservation thanks to the famous Barry Scrapyard, where steam engines which had been bought from British Railways for scrap were stored rather than cut up. One engine, 35028 "Clan Line", was bought by the Merchant Navy Locomotive Preservation Society direct from BR in 1967.