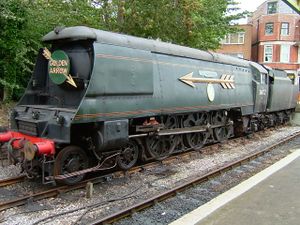 The Southern Railway (SR) West Country and Battle of Britain Classes, also known as Bulleid Light Pacifics, are classes of streamlined 4-6-2 steam locomotive. Designed for express passenger and semi-fast work in South-East and South-West England, 110 of them were built.

The two classes are identical: only the themes of their names are different. They were designed by the Southern Railway's Chief Mechanical Engineer Oliver Bulleid as a lighter version of his SR Merchant Navy Class. They incorporated many of the innovations found in that class, such as chain-driven valve gear driven via an oil-filled gearbox. 66 of the class were named after places in the West Country served by the Southern Railway, and the rest took their names from RAF squadrons, airfields, commanders and aircraft from the Battle of Britain.

The SR number followed an adaptation of the UIC classification system where "2" and "1" refer to the number of unpowered leading and trailing axles respectively, and "C" refers to the number of driving axles – in this case three. However, since "21C" was the prefix already used by the Merchant Navy class, the suffix "1" was added; all these locomotives therefore carried numbers which started "21C1" followed by the individual two-digit identifier.

The final 40 engines were built after the railways were nationalised in 1948, and so never carried SR numbers.

Between 1957 and 1961, British Railways rebuilt 60 of the class as more conventional engines, adopting many features from the BR Standard locomotives that had been introduced since 1950. The streamlined casing was removed and replaced with conventional boiler cladding, and the chain-driven valve gear was replaced with Walschaerts valve gear.

The locomotives were successful. Their light driving axle loading meant that they were often prone to wheelslip, requiring very careful driving when starting a heavy train from rest, but once into their stride they were noted for excellent steam production and speedy running.

On 30 January 1965 No.34051 "Winston Churchill" hauled the funeral train of its namesake from London's Waterloo station to his final resting place, close to Blenheim Palace in Oxfordshire, where he was born.

No fewer than 20 of these useful locomotives escaped the cutting torch and still exist in varying states of preservation.

Key to notes: (Surviving locos are marked with an asterisk '*')