AirTrain Newark is a 3-kilometer (1.9-mile) monorail system connecting Newark Liberty International Airport (EWR) to the Newark Liberty International Airport train station on the Northeast Corridor (NEC) rail line of New Jersey Transit and Amtrak. Originally serving just the airport, the monorail track was refurbished and extended to the NEC, with construction beginning in 1997. The system reopened for service on October 21, 2001. It is operated by the Port Authority of New York and New Jersey, which also operates the airport and AirTrain JFK.

The AirTrain has three major stations within the airport, one for each main terminal (A, B, and C). There are four other stations (P1, P2, P3, and P4) for the parking lots and rental car facilities plus an eighth at the Northeast Corridor. Automated announcements tell riders which airlines can be found in each terminal. The announcements were recorded by former New York City traffic reporter Bernie Wagenblast.

The train is free, except to and from the Amtrak/New Jersey Transit station. In that case, the fare is included in the price of the train ticket. New Jersey Transit monthly pass holders must pay an extra $5.50 to ride AirTrain. 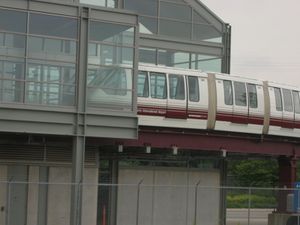