A funicular (from Latin, funiculus, the diminutive of funis, "rope") also called funicular railway, inclined railway, inclined plane, or, in the United Kingdom, a cliff railway, is a type of self-contained cable railway in which a cable attached to a pair of tram-like vehicles on rails moves them up and down a very steep slope, utilizing one ascending and one descending tram cabin to counterbalance each other. 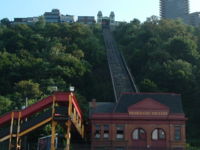 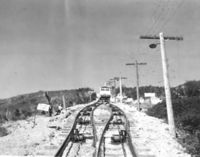 The passing track configuration of the Mount Lowe Railway as devised by Prof. Thaddeus Lowe.

The basic principle of funicular operation is that two cars are attached to each other by a cable, which runs through a pulley at the top of the incline. Counterbalancing of the two cars, with one ascending and one descending the slope—especially when transporting similar loads, such as passengers —minimizes the tractive effort needed to lift the ascending car.

The usual engineering practice is to splice the cable ends together thereby creating a continuous cable loop. The cars are attached equidistantly at opposite points on the cable loop. The cable is driven by any means of winching at one end of the run, and held taut by a tensioning wheel at the other. Other sheeve wheels are employed to guide the cable to and from the drive mechanism and the incline cars. Locomotion is created by alternately reversing the direction of the drive mechanism so that the cars switch positions on the incline, that is, one up and one down.

In some cases, such as on the Duquesne Incline in Pittsburgh, Pennsylvania, there are parallel sets of tracks and platforms for each vehicle. The wheels of the cars are usually single flanged resembling those on standard railway vehicles.

The four-railed funicular was a standard up until the 1890s when Professor T. S. C. Lowe, builder of the Mount Lowe Railway, devised a passing-track configuration in which the inboard wheels of the cars shared a common center rail except at the passing point (center of the funicular) where the rails divided into two sets and were rejoined after the cars could clear each other. This three-railed configuration became the new world wide standard. 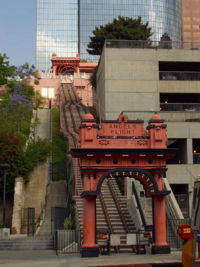 Cars used with a three-railed configuration have flanges on both sides of the outboard wheels which keeps them aligned with the outer rail thus holding each car in position. The inboard wheels are typically unflanged and ride on top of the opposite rail thereby easily crossing over the rails at the passing track juncture.

Angels Flight funicular in Los Angeles employs the three-rail configuration, also called a gantlet or gauntlet track. Angels Flight uses separate cables for each car which are powered from a geared mechanism rather than using a single cable attached at each end to the cars. 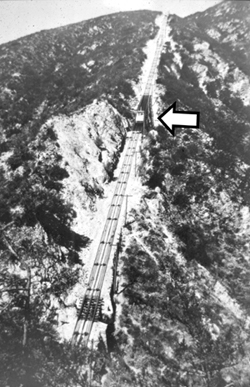 The Great Incline funicular of the Mount Lowe Railway (1893 - 1938). Arrow denotes location of ascending car on the Macpherson Trestle. Grade: 62%.

The earliest such railways were water-driven, allowing barge traffic of canals to ascend and descend steep hills. The first appears to have been on the English Ketley Canal built in 1788.They were used primarily in the early 19th century, especially during the height of the canal-building era in the 1830s in the United States.

Such railways operated by allowing water in feeder canals at the top of the plane to drive a turbine, raising or lowering a canal barge along a steep slope. Along level sections, the railroads essentially operated as standard towpath canals, with the barges typically drawn by horse or mule.

Examples of hydropower inclined plane railroads in the United States included the Allegheny Portage Railroad, part of the Pennsylvania Main Line Canal, built in 1834 with ten planes as the first railroad across the Allegheny Mountains of Pennsylvania. Similarly, the Morris Canal in New Jersey connected the Delaware River with the Passaic River using 23 planes, as well as a series of locks along the gentler gradients.

One of the most famous funiculars of its time was the Great Incline of the Mount Lowe Railway in Altadena, California, designed by Andrew Smith Hallidie of San Francisco cable car fame. The Mount Lowe Railway combined its funicular, for raising passengers 2,800 feet (859 m) up the steep side of Mount Echo (elev. 3500 ft or 1067 m), with two electric traction, narrow-gaged trolley systems on either end. The Incline had three grade changes starting with the lower end at 62% and easing to a 48% grade at the top. The cars were designed to adjust to the grade changes for the comfort of their passengers. A particular feature of the Great Incline was the use of only the three rails borne out of the need to reduce the width of the grading on the incline. An added advantage was the reduction of materials even though a complicated cable routing system was needed in the passing track juncture.[1]

The funicular on Mount Vesuvius inspired the song Funiculì Funiculà written in 1880. That funicular was wrecked repeatedly by volcanic eruptions and finally abandoned after the eruption of 1944.

Funiculars of the world 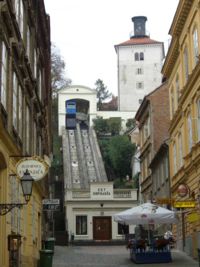 The Uspinjače funicular in Zagreb

The world's steepest passenger railway is claimed as the Katoomba Scenic Railway, a funicular down the wall of the Jamison Valley near Katoomba, New South Wales, Australia, with maximum grade of 122% (that is, 52° from horizontal). [1]

The Great Incline of the Mount Lowe Railway (right) had multiple grades with cars that adjusted to the variations. The gentlest grade was 48%. The steepest was 62%.

Other funicular railways include the Peak Tram in Hong Kong, the Festungsbahn in Salzburg, the 600 meters (1969 feet) Taksim-Kabatas [2] in Istanbul, Turkey, the Lycabettus Hill funicular in Athens, Greece, the Penang Hill Funicular in Penang Island, Malaysia, Mt. Koya Funicular and the Mt. Takao cablecar outside of Tokyo, Japan.

Water-powered funiculars include the Lynton and Lynmouth Cliff Railway in North Devon, England, the Centre for Alternative Technology Cliff Railway in Gwynedd, Wales, the Nerobergbahn in Wiesbaden, Germany and Bom Jesus funicular in Braga, Portugal (the oldest, still working in the world).