This article is about the railway passenger service known as the "Flying Scotsman".
For the LNER locomotive of the same name, see: LNER Class A3 4472 Flying Scotsman. 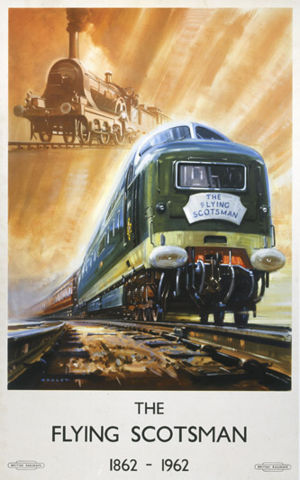 British Railways Poster celebrating the centenary of the Flying Scotsman. The locomotives shown are a GNR Stirling Single and a Class 55 'Deltic'.

The Flying Scotsman is a passenger train which has run between London, England and Edinburgh, Scotland since 1862. It is currently operated by GNER.

The East Coast Main Line over which the Flying Scotsman runs was built in the 19th century by many small railway companies, but mergers and acquisitions led to only three companies controlling the route; the North British Railway, the North Eastern Railway and the Great Northern Railway. In 1860 the three companies established the East Coast Joint Stock for through services using common vehicles, and it is from this agreement that the Flying Scotsman came about.

The first Special Scotch Express ran in 1862, with simultaneous 10am departures from the GNR's King's Cross Station in London and North British's Waverley Station in Edinburgh. The original journey took 10½ hours, including a half-hour stop at York for lunch; however, increasing competition and improvements in railway technology saw this time reduced to 8½ hours by the time of the Race to the North in 1888.

From 1900, the train was dramatically modernised, introducing such features as corridors between carriages, heating, and dining cars. As passengers could now lunch on the train, the York stop was reduced to 15 minutes, but the overall journey time remained 8½ hours.

In 1923, the railways of Britain were 'grouped' into the so-called 'Big Four'. Consequently, all three members of the East Coast Joint Stock became part of the newly formed London and North Eastern Railway.

It was the London and North Eastern which, in 1924, officially renamed the Special Scotch Express as the Flying Scotsman, a name under which it had been unofficially known since the 1870s. To further publicise the train, a newly built Gresley A1 Class locomotive was named after the train, and put on display at the 1924 British Empire Exhibition. The same locomotive was later used to haul the train and, in 1928, ran the 392 miles between Edinburgh and London without stopping, a record at the time. The Flying Scotsman would remain a non-stop service right through past nationalisation (with the exception of WW2) until about the mid 1950s where the Deltic diesel locomotives took over.

As Gresley's locomotive designs developed, the Flying Scotsman got faster and the journey time decreased. By 1938, it was down to 7 hours and 20 minutes. The LNER also improved catering and other on-board services.

In the late 1950s British Railways were committed to dieselisation, and began devising a replacement for the Gresley Pacifics on the East Coast Main Line. The result was the Class 55 'Deltic', and the Deltic-hauled Flying Scotsman became a centrepiece of British Railways advertising, as it had been for the LNER.

The Flying Scotsman name is still used by today's operator of Anglo-Scottish trains on the East Coast Main Line, Great North Eastern Railway (which subtitles itself The Route of the Flying Scotsman). On Mondays to Saturdays the northbound service departs from London King's Cross at the traditional time of 10.00 (20 minutes later on Sundays in the current, 17 September – 9 December 2006, timetable) while the southbound service leaves Edinburgh daily at 13.00 (having originated on Mondays to Saturdays one hour earlier at Glasgow Central).

The Great North Eastern Railway's Flying Scotsman is usually operated by a 'Mallard' InterCity 225, and the journey takes around 4½ hours.

As a major link between the capital cities of England and Scotland, the Flying Scotsman was an extremely long and heavy train, especially in the days before road and air transport became common. As such, it has required very powerful locomotives. Locomotives used to haul (and in some cases, specifically designed to haul) the Flying Scotsman have included: