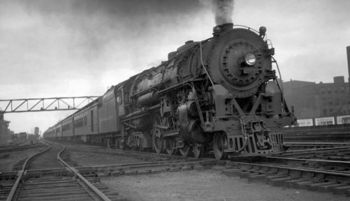 Train No. 25 of the Boston & Albany Railroad, The 20th Century Limited, is seen leaving Springfield, Massachusetts on August 22, 1933.

"Drumhead" logos such as these often adorned the ends of observation cars on the 20th Century Limited.

The 20th Century Limited was an express passenger train operated by the New York Central Railroad from 1902 to 1967, during which time it would become known as a "National Institution" and the "Most Famous Train in the World." In the year of its last run, The New York Times said that it "...was known to railroad buffs for 65 years as the world's greatest train." The train traveled between Grand Central Terminal in New York City and LaSalle Street Station in Chicago, Illinois along the railroad's famed "Water Level Route". The NYC inaugurated this train as direct competition to the Pennsylvania Railroad's Broadway Limited, both lines intended for upper class as well as business travelers between the two cities. Making few station stops along the way and as few breaks for water and coal as possible, trains on this route routinely could make the 938-mile journey in only fifteen and one-half hours (roughly 60 mph ).

Known for its speed as well as for its style, passengers walked to and from the train on a plush, crimson carpet which was rolled out at station stops and specially designed for the 20th Century Limited; thus, the "red carpet treatment" was born.

On its inaugural trip June 17, 1902 the train arrived in Chicago at Union Station three minutes ahead of schedule. At that time, the trip took twenty hours, cutting four hours off the time previously required. The New York Times report laid great stress on the routine nature of the trip, with no special procedures being followed and no special efforts being made to break records. It stated that there "...was no excitement along the way," and quoted a railroad official as saying "...it is a perfectly practical run and will be continued," and the engineer (William Gates) as saying "This schedule can be made without any difficulty. I can do it every time, barring accidents." 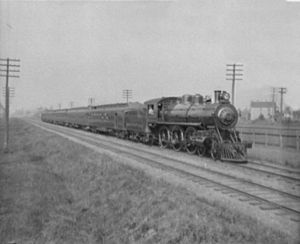 In its heyday, regular passengers included Theodore Roosevelt, William Jennings Bryan, Lillian Russell, "Diamond Jim" Brady, the elder J. P. Morgan, Enrico Caruso, and Nellie Melba. In 1928, its peak year, it earned revenues of $10 million and was believed to be the most profitable train in the world. Also in 1928, Erwin "Cannon Ball" Baker, who eventually became the first commissioner of NASCAR, raced the 20th Century Limited from New York to Chicago in an automobile, beating the train. In 1938 the noted industrial designer, Henry Dreyfuss, was commissioned by the New York Central to design the streamlined train sets in Art Deco style, with the locomotive and passenger cars rendered in blues and grays (the colors of the New York Central). The streamlined sets were inaugurated in 1939.

Until 1957, the train only made station stops at Grand Central Terminal and Croton-Harmon for New York-area passengers and LaSalle Street Station and Englewood for Chicago-area passengers [1]. If trains ran on schedule they would pass halfway at Buffalo Central Station. The tracks of the New York and Harlem Railroad were used from Grand Central to the Spuyten Duyvil and Port Morris Railroad, which it used to reach the New York Central's main line along the Water Level Route, north along the Hudson River and west to Buffalo, then southwest and west on the Lake Shore and Michigan Southern Railway along the south shore of Lake Erie, and north into Chicago, merging with the Chicago, Rock Island and Pacific Railroad at Englewood. In case of track closures, alternate routes such as the New York and Harlem Railroad or West Shore Railroad could be used.

The 20th Century Limited (and specifically, car #10006) was used in the filming of Alfred Hitchcock's North by Northwest, released in 1959. The car was built by Pullman-Standard in 1939, and was scrapped in 1968. It carried the name Imperial State and featured 4 double bedrooms, 4 single compartments, and 2 drawing rooms (a "4-4-2"). The interior of the car as seen in the film was actually a set built by MGM Studios.

By the late 1950s the train was in decline. On December 2, 1967 at 6 p.m. the train left Grand Central Terminal on track 34 for the last time, half full. As always, carnations were given to men boarding the train, and perfume and flowers to the women. The next day, it straggled into LaSalle Street Station in Chicago nine hours late on account of a freight derailment in the State of Michigan.

Today, Amtrak operates a route called the Lake Shore Limited, which travels almost exactly along the same path as the 20th Century. The only differences are at the two ends: at the New York terminus it runs to Penn Station, and on the Chicago end it switches to the former Pennsylvania Railroad's Pittsburgh, Fort Wayne and Chicago Railway at Whiting, Indiana, running into Union Station. 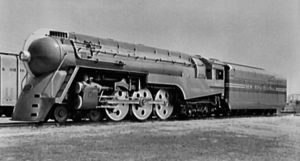 One of the NYC Hudsons fitted with the iconic streamlined casing designed by Henry Dreyfuss.

The 20th Century Limited was the setting for a Broadway musical composed by Cy Coleman and written by Betty Comden and Adolph Green entitled On the Twentieth Century, about the romantic complications of a beautiful actress and an egocentric producer/director. Madeline Kahn and John Cullum starred in the short-running production, whose spectacular production design featured both the lavish Art Deco details of the time period as well innovative staging to open up what could be cramped quarters inside a train car. The musical was based on a stage play of the same subject, which was adapted as a film entitled Twentieth Century, with Carole Lombard and John Barrymore in the lead roles. The train also figured prominently as a setting for major scenes in both Alfred Hitchcock's North by Northwest and George Roy Hill's The Sting.