Siemens Velaro is a family of high-speed EMUs. It includes Deutsche Bahn's classes 403 and 406, which are known as as ICE 3 and ICE 3M respectively. Four multisystem trains, known as ICE International are owned by Nederlandse Spoorwegen. Spanish RENFE has ordered a stronger version, known as Velaro E for their AVE network. Wider versions were ordered from China for the Beijing-Tianjin high-speed rail (CRH 3) and from Russia for the Moscow - Saint Petersburg and the Moscow - Nizhny Novgorod route (Velaro RUS). 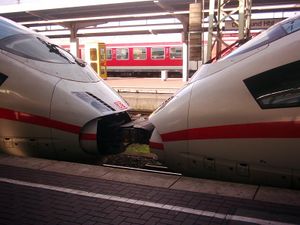 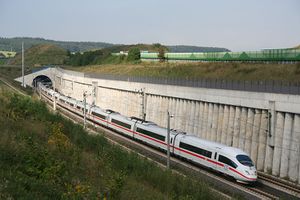 ICE 3 at the rate of 300 kmh/186 mph near Montabaur on the Cologne-Frankfurt high-speed rail line.

The ICE 3 (Class 403) is the original version of the Velaro. Its design goal was to create a higher-powered, lighter train than its predecessors. This was achieved by distributing its 16 traction motors underneath the whole train. The train is licensed for 330 km/h and has reached 368 km/h on trial runs. In InterCityExpress service it is limited to 300 km/h, because this is the maximum design speed of German high-speed lines.

Because the train does not have powerheads, the whole length of the train is available for passenger seats, including the first car. The so-called lounge-seats are located directly behind the driver, separated only by a glass wall.

The ICE 3M (M for multisystem) was developed to operate services outside Germany under different Railway electrification systems. As of 2006, the train is licensed for operation in Switzerland, the Netherlands and Belgium. In Belgium, the train is limited to 250 km/h instead of 300 km/h due to problems with flying gravel and its frictionless electromagnetic brake brake.

Licensing procedures for France have been underway for several years with the goal of a joint service with the TGV on the LGV Est starting in 2007. In France, the ICE 3M will reach speeds of up to 320 km/h. During testing, problems were encountered - loose gravel ripped the covers off trackside equipment, and the ICE's braking system was met with considerable skepticism as well. Trial runs were completed in late 2005. Currently, the results of these tests are being assembled and reviewed by French officials.

In 2001, RENFE ordered sixteen Velaro, which will be designated AVE S-103. The order was later added to for a total of 26 trains. The trains will serve the 630 km Barcelona—Madrid line at speeds up to 350 km/h for a travel time of 2:30 hours.

The first units were delivered in July 2005 and completed their first test runs in January 2006.

On 15 July 2006 a train achieved a top speed of 403.7 km/h between Guadalajara and Calatayud on the Madrid—Zaragossa line. This is a Spanish record for railed vehicles and a world record for unmodified trainsets, as the earlier TGV and ICE records were achieved with specially modified and shortened trainsets.

On May 19, 2006 Siemens announced the ordering of 8 Velaro RUS high speed trains by Russian Railways including a 30-year service contract. The contract is in total worth 600 million euro. The trains, connecting Moscow with Saint Petersburg, and later also Moscow and Nizhny Novgorod at a speed of up to 250 km/h, are based on the ICE3 train standard but broadened by 33 cm to fit Russian broad gauge. Some trains will be prepared for both direct current and alternating current operation. The total length of each ten-car train will be 250 m, carrying up to 600 passengers. Development and construction is being carried out in Germany and will be completed with the delivery of the last unit in 2010.

In November 2005, China ordered 60 Velaro trains for the Beijing-Tianjin high-speed rail line. The trains will be very similar to the ICE 3, but 30 centimeters wider to fit in additional seats. In the CRH 3 version, a 200 m Velaro train will seat 600 passengers. These train would be manufactured jointly by Siemens and CNR Tangshan.