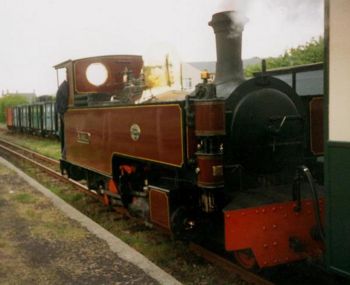 Russell running on the Welsh Highland Railway in 1995

Russell has a complex history.

A 2-6-2T steam locomotive, the design of Russell is based on the locomotives supplied to the Sierra Leone Government Railway (indeed one driving wheel centre bears the initials SLR). Originally built with air train brakes, converted to vacuum train brakes following the linking of the Welsh Highland and Ffestiniog Railways. It was fitted with air and vacuum brakes following restoration.