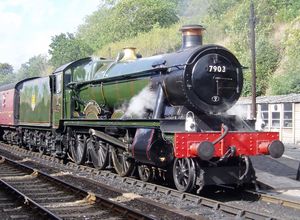 7903 Foremarke Hall at Bewdley on the Severn Valley Railway on 25 September 2005.

The Great Western Railway (GWR) 6959 Class or Modified Hall Class is a class of steam locomotive. They were a development of the earlier Hall Class by Frederick Hawksworth.

The most obvious visual difference is that the steam pipes exit the smokebox slightly higher and from a frontal aspect, the leading pony truck has a solid bar across the front. Some of them were also equipped with flat, high-sided Hawksworth tenders.

A total of 7 have survived to preservation.