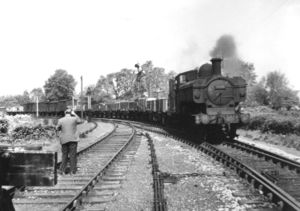 9729 at Highbridge Yard after the Western Region had taken over the S&D. 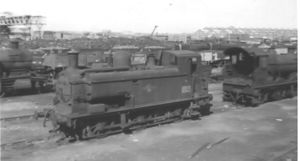 11 engines of the 5700 Class, nos 9700-10 were turned out with various modifications for working along the Metropolitan Line.

The Great Western Railway (GWR) 5700 Class is a class of 0-6-0 pannier tank steam locomotive, built between 1929 and 1950. 863 were built, making them the 2nd most produced British class of steam locomotive.

The GWR had favoured Pannier Tank locomotives since 1911 when they had started rebuilding locomotives built between 1870 and 1905 into this style. By 1929 these older locomotives were in need of replacement.

The first 5700s had round spectacles in the cab front but those built after 1933 had rectangular windows.

The size of the class demanded that the 5700 class locomotives were spread across several series of numbers.

Most were built at Swindon Works, but about 25% were built by private builders:-

The GWR 5400 Class locomotives were a smaller engine, and had larger wheels and were auto-fitted for push pull passenger work. The GWR 6400 Class were similar to the 5400, but had the same size wheels as the 5700, and the GWR 7400 Class were very similar to the 6400 class, but were not auto fitted. The GWR 9400 Class was the post war updated design, heavier, longer and more powerful, using the same taper boiler as the GWR 2251 Class

The 9700 Class Pannier Tanks were a direct development of the 5700 Class. The prototype for the class, No.8700 (later 9700), was a rebuilt 5700 locomotive. They were specifically for working on the Metropolitan/Hammersmith & City lines between Paddington Stations and Smithfield Meat Market. They replaced 'Metro' and '633' class locomotives.

The eleven locomotives in the class had condensing apparatus that fed the exhaust steam back into the water tanks. The tanks themselves were shortened to make room for the external exhaust pipes and were extended down to the footplate in front of the cab to increase their capacity. As condensing the steam heated the water, a reciprocating pump (Weir pump) was fitted as a boiler feedwater pump because standard injectors will not work with hot water. The pumps led to (unsuccessful) tests with these locomotives acting as fire engines during World War II.

To work over the electrified underground lines, the 9700 Class locomotives had a special type of ATC equipment that lifted clear of the centre rail and had tripcock brake valves that matched the London Transport signalling system.

London Transport and industrial use 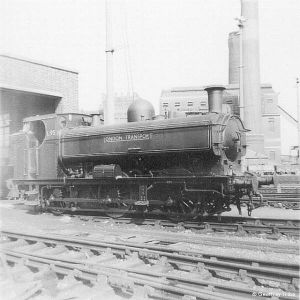 A number of 5700s were sold for further use after being withdrawn by British Railways. The National Coal Board bought a few (at least six) but the best known are those bought by London Transport.

Eleven 5700s were bought by London Transport and used on the London underground network starting in 1956. They replaced older LT steam locomotives on Permanent Way trains and were never used on normal passenger services. Main line running included trips between depots, to Acton Works and runs out to Croxley Tip, near Watford. A further two locomotives were later bought to replace classmates that were withdrawn in need of major repairs.

The tripcock brake valve system was fitted to these locomotives and worked on the vacuum system, stopping the locomotives whether or not they were pulling a train.

They were numbered L89 to L99 and were allocated to the depots at Lillie Bridge (Kensington) and Neasden. Only eleven were running at any one time, the original L90 being withdrawn for repairs but scrapped instead and replaced by another locomotive which carried the same number.

The LT 5700s lasted until the end of steam on London Transport in 1971. Three diesel locomotives were bought to carry out the shunting duties from then on.

The last 5700 in service was at Mountain Ash colliery, where it was working well into the 1970s and could still be seen on shed in 1980. 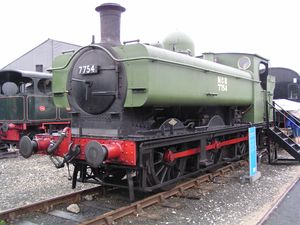 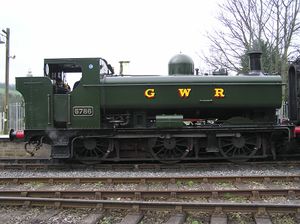 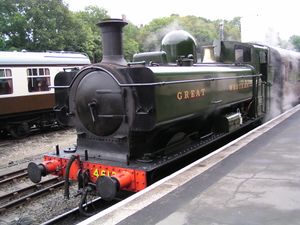 A total of 16 5700 class locomotives have survived to be preserved along with a number of the other types of Pannier Tank.

As the oldest locomotives were the first to be withdrawn and sold for further use, there are a disproportional number of early locomotives in preservation. A number of those bought from London Transport were still in running order and were used on preserved lines with minimal work.

Several preserved locomotives have run in London Transport colours but only 7715/L99 has been consistently so painted.

5775 on the Keighley and Worth Valley Railway featured in the 1970 film of The Railway Children painted Brown and lettered for the "Great Northern and Southern Railway".

"Duck the Great Western Engine" in the The Railway Series books by Rev. W Awdry was a 5700 class Pannier Tank.