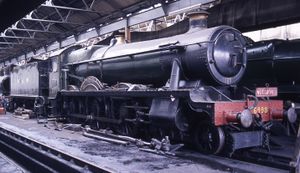 Despite GWR no longer existing after the nationalisation of the railways in 1948 to form British Rail, Burton Agnes Hall was built to GWR specifications at Swindon in January 1949. Initially allocated to Cardiff, she was finally withdrawn by British Rail in 1966.

The locomotive is notable in that it hauled the Western Region's last ever steam-hauled train. The locomotive was acquired by the Great Western Society in 1966, and moved to the Didcot Railway Centre in 1967.

Since 1996 the locomotive has been a stationary exhibit only and is awaiting overhaul.