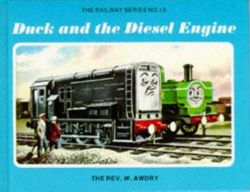 Duck was heavily featured in the Railway Series book Duck and the Diesel Engine. Duck can be seen in the cover illustration, alongside Diesel.

Duck the Great Western Engine is a fictional steam engine from The Railway Series by Rev. W. Awdry and the spin-off television series Thomas the Tank Engine and Friends. He is a green 0-6-0 Pannier Tank locomotive and lives and works on the Island of Sodor.

Sir Topham Hatt (The Fat Controller) bought Duck from The Other Railway in 1955 to take Percy's place as station pilot at Tidmouth. (See Percy the Small Engine). Since Sir Topham had been apprenticed at Swindon, he allowed Duck to return to his original Great Western livery, and retain his number '5741', which Duck wears proudly on cast brass numberplates on his cab sides.

Duck is not actually his real name. When he first arrived, he explained that his real name was Montague, but he was usually called Duck because everyone said he waddled. Although he claims this was not true, he prefers Duck to Montague, and now that is what everyone calls him.

The arrival of Duck allowed Percy to move to Thomas' branch line to help Thomas with his goods traffic.

Despite an incident when a devious engine called Diesel spread lies about him, the Fat Controller realised what a useful engine he had in Duck, and eventually gave him a branch line of his very own.

Duck's branch line runs between Tidmouth and Arlesburgh and is nicknamed The Little Western, as all the locomotives and coaches have been restored to Great Western Railway livery. Duck shares the passenger duties with Oliver, but has his own two autocoaches: Alice and Mirabel.

Duck sometimes helps on other lines. He makes friends easily, and the Fat Controller says that he makes everything run like clockwork. "There are two ways of doing things," Duck says, "the Great Western Way or the wrong way." This has been known to annoy the other engines.

Duck in the TV Series

He worked as a dock shunter, among other duties, until he received his branch line in the episode 'Donald's Duck' (set, in the television series, before the arrival of Oliver).

Until Season 12, Duck has not appeared in any episodes since the seventh season, but has appeared in a song which was broadcast alongside the tenth season. In Season 12, he played a supporting role in 4 episodes.

The nickname "Duck" comes from Rev. W. V. Awdry's OO scale model railway. He had bought a GWR Pannier tank engine manufactured by Gaiety as a spare engine for his model railway, but one of the wheels was not quite concentric, and the model had a pronounced waddle, earning the nickname "Duck" which stuck long after new wheels had been fitted.

Duck is based on the 57xx class built by the Great Western Railway and still carries the colours of the GWR. These engines were designed to shunt and to work branch lines, and many were still working beyond the end of steam on British Railways. Several are preserved on steam railways up and down the United Kingdom, where they have proved as useful and versatile as Duck himself.

In the biographical work The Thomas the Tank Engine Man, Rev. W. Awdry recalls seeing pannier tanks at work on the Great Western Railway at Box in Wiltshire, where he lived as a child. These would not have been 57xx tanks, but might have been an early influence nonetheless.